By Askar Beisenbayev in Sports on 21 August 2013

ASTANA – The annual Cup of the President of Kazakhstan open ice hockey tournament was held in early August. It was the fourth tournament of the international season and is considered one of the year’s most important tournaments. 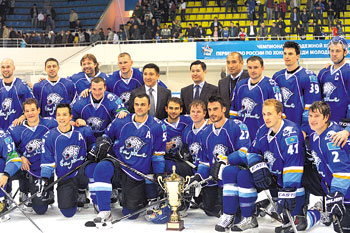 The tournament is three years old and was won the first two years by the Barys hockey team of Kazakhstan. Last year’s cup was won by the SKA team of St. Petersburg. This year’s event drew such teams as Vityaz from Podolsk, Amur from Khabarovsk and Yugra from Khanty-Mansiysk.

Kazakhstan was represented in this year’s tournament only by Astana Barys, as opposed to previous competitions which also saw Kazzinc-Torpedo from Ust-Kamenogorsk and an experimental national team.

On the final day of this tournament, Khabarovsk defeated Podolsk 4-0 and took third place.

Longtime rivals the Astana Barys and Khanty-Mansiysk teams battled in the final game for the cup. Their rivalry dates back to the days when they were playing in the first division of the Open Russian Championship.

The final cup game was worthy of their rivalry with the Khanty-Mansiysk team pulling ahead three times and the Astana Barys team battling back to tie it up each time. And at minute 49, the Astana team scored a final time, deflecting the puck off the skate of Khanty-Mansiysk defender Guntis Galvinsh and into the net to win 4:3.

The crowd roared as the Barys players raised the cup over their heads for the third time.