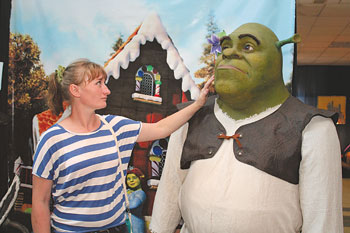 Visitors to the Wax Museum Exhibition have a chance to take a picture with their favourite movie characters.

ASTANA – An exhibition from the St. Petersburg Wax Museum opened to the public on Aug. 11 at Astana’s Aqua Park.

The centrepiece of the exhibit are figures of people from the Guinness Book of Records, such as Matthew McGrory, who had a size 63 foot, , Francois Pele, the person with the biggest ears who lived in the nineteenth century a two-headed Chinese woman, a four-legged Englishwoman, the tallest (223 cm) and the shortest twins (76 cm) and the man-Cyclops-Rob Wright, an Afro-American with one eye on the bridge of his nose, Indian Gard Berseth, who was born without arms, but could shoot from a bow with his legs and once shot 82 birds in one hour. The Englishwoman with four legs was the mother of five children and the man-Cyclops was a respected and religious person.

In addition to those listed in the Guinness Book of World Records, other individuals were also exhibited, including the beloved protagonists of “Gentlemen of Fortune”, “Peculiarities of the National Fishing” and characters of “Star Wars” and “Shrek.”

A total of 1,500 wax figures are on display in an exhibition with tickets costing roughly three dollars.