By Nadezhda Khamitova in Sports on 21 August 2013 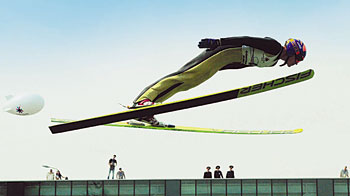 A ski-jumper flies above Almaty taking off from the newly built facility during the Asian Winter Games in Almaty in February 2011.

The decision for Almaty, Kazakhstan’s largest city and its so called southern capital, to bid for the games was made on behalf of instructions from the President of Kazakhstan after a recent meeting of the agency, Almaty city officials and the National Olympic Committee.

The city of Almaty, according to Kozhagapanov is “almost ready” to host an Olympics because many of the facilities necessary were constructed and tested during the Asian Winter Games in 2011.

“It remains to construct several sports facilities, and by 2022 we will have repaired some of the facilities, but overall Almaty is ready. Transport logistics is developed, people and volunteers are ready,” Kozhagapanov said.

Additionally, the Vesti.kz news website on Aug. 19 quoted the vice president of Kazakhstan’s National Olympic committee, Pavel Novikov, as saying an official letter was sent to the International Olympic Committee in Switzerland on Aug. 16.

The deadline for applications is Nov. 14. To date, Kazakhstan has twice applied for a Winter Olympics, but this time the country is expected to have a greater chance. The country hosted the 7th Asian Winter Games in 2011 and looks forward to hosting the upcoming 2017 Winter Universiade. At the same time, heads of various international sports federations who have visited Almaty have highly assessed the potential of the city.

At a recent presentation of the Presidential Sports Club Astana, Kazakhstan athletes supported the desire of the country to take part in the competition for hosting Olympics in 2022. President Nursultan Nazarbayev has also emphasized that the country should become a world-class sports power.

“The country has sports clubs that defend the honor of the country in competitions of the highest rank. There was a galaxy of brilliant athletes who praised Kazakhstan for its victories. But we will not stop. It is necessary to integrate resources and continue on the basis of highly professional sports management. It is a springboard for conquering new heights. Our champions, as well as the country’s achievements … (are recognized through sporting success), presenting to the world our best qualities. Kazakhstan should be known as a nation of winners. After securing the right for the Universiade in Almaty, we want to apply for the Winter Olympics in the southern capital. All conditions have been created for this, and we hope for your support,” Nazarbayev said.

“Of course, I have heard about the initiative of the president,” said Olga Shishigina, Olympic champion in Sydney 2000 and Honored Master of Sports of the Republic of Kazakhstan, to local media concerning the Olympic bid. “I see the importance of the Olympics in 2022. … (and) in the introduction of Kazakhstan’s sports at the international level if there is a positive decision. This includes the development of tourism and new sports facilities for athletes, allowing the improvement of their skills. Also it will strengthen a sense of civic pride and national unity, and of course, the growing prestige of the host city and country as a whole.”

“I think the reason for such an initiative made by the president has various factors. Conducting a major sporting event has the potential to bring direct and indirect economic benefits, including the construction of infrastructure associated with this event and lower transport costs due to improved road or rail ways. It is also an opportunity to present the host city or country as a potential destination for tourism or business in the future,” said 2000 Sydney Olympics wrestling silver medalist and Honored Master of Sports of the Republic of Kazakhstan Islam Bayramukov.

Winter Olympics 2022 will be the 24th Winter Olympic Games and is scheduled to be held in early 2022. The International Olympic Committee will announce the location of the 2022 Winter Olympics during its regular July and August 2015 session in Kuala Lumpur, Malaysia.