By Svetlana Abenova in Tourism on 21 August 2013

ASTANA – Excavation work at three more ancient royal burial sites in Eastern Kazakhstan have been completed as part of a project to create an open-air museum and youth camp. 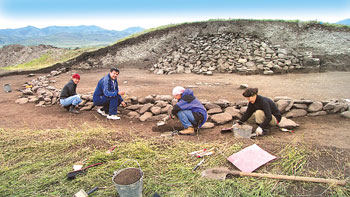 The excavation work comes shortly before scientists from more than 15 countries were set to assemble on August 23-24 to discuss the development of cultural genesis of the early nomadic era.

The recent excavation work included the opening of the Berel burial sites on the days of the Second International Forum “Altai – Golden Cradle of the Turkic World.”

The question on many peoples’ minds as this recent excavation work was being completed was what other discoveries might be found in the so-called Valley of Saka Kings.

Archaeologist and doctor of historical sciences Zeinolla Samashev, who was the first to discover the Berel mounds phenomenon, says that when they were getting down to the excavations on the Berel necropolis in 1998, he could not imagine that he would stay on-site for so long.

“The royal burial site was likely to have been chosen by the clergy and the elders as it is in the valley, which occupies a dominant position amid an amazingly beautiful landscape bordered by mountains and Bukhtarma river streams. In the ancient mythology, the mountains had a special meaning since their peaks were believed to be inhabited by gods, whereto the souls flew after death,” Samashev said.

More than 20 burial mounds at the Berel site in eastern Kazakhstan have already been explored, including their unique architecture and interior designs. It appears the ancient inhabitants of eastern Kazakhstan possessed the skills to build stone structures that for two millennia withstood ongoing permafrost. The region’s ancient inhabitants also knew the secrets of embalming that helped protect from decay the mummified remains of chieftains and nomadic nobility, which were placed in special larch sarcophagi made of one-piece larch trunk.

“Of course, during all this time there were both natural and artificial fluctuations in the soil temperature. The latter resulted from the plundering of the articles put inside the tomb,” Samashev noted.

The burial mounds also appear to have protected the remains of the royalty’s horses. In mound number 11, which contains a larch sarcophagus in a wooden frame with the remains of a Saka king and of a woman next to him, 13 horses were also found. A full-size replica of the horse was reproduced by well-known Kazakh restorer Krym Altynbekov and is now stored in the Museum of East Kazakhstan State University.

Most of the jewelry, horse trappings and weapons discovered at the recently excavated mounds are in the form of real and mythological animals, which conveyed certain ideas and messages.

“The existence on the Berel burial site of several large mounds with chains of smaller graves around them and other features point to existence of one of the ethno-political and cultural centres of the ancient nomads there – the creators of the Pazyryk archeological culture of the Altai mountain area”, Zeinolla Samashev wrote in his book two years ago.

Samashev returned from Germany a month ago where an exhibit of Kazakhstan archaeological finds is being displayed with Berel artifacts as the centerpiece of the exhibit. Prior to Germany, the exhibit was displayed for nearly a year in New York and Washington.