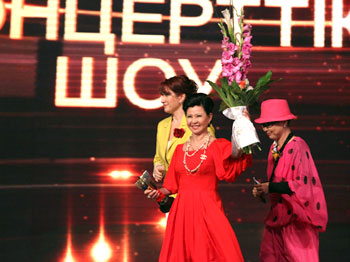 ASTANA – Astana’s Capital Day celebrations included the first awards ceremony of the new national music award, Astana Zhuldyzy (The Star of Astana), initiated by the Astana city administration. During the event, Kazakhstan Central Concert Hall became the starriest place in the capital, with limousines depositing musicians and other members of the music industry on the event’s red carpet.

This national award is distinguished from others by the professional expertise of its panel of judges. Experts who evaluated the work of the nominees included honoured celebrities of Kazakhstan Roza Rymbaeva, Nagima Eskalieva, Saken Maygaziev and others, as well as producers, composers, songwriters, specialists in singing and fashion and even media and public representatives. The system for selecting the winners was developed based on the practices of the most prestigious music competitions around the world.

Creative works issued from January 2012 to May 2013 by local artists and performers competed in 15 categories, a number which reflects the age of the capital. Three leaders in each category, selected in the first round, competed for the right to be called the best.

“I believe that our popular music has taken a big step forward. Although I’m not a pop star, and it was difficult for me to assess the performers of this genre, I’m still sure that is a great joy to be able to improve talents at home, instead of looking for them abroad. Let the project live long and provide an incentive for further development of the national culture,” said People’s Artist of the USSR Bibigul Tulegenova, a judge.

Astana Zhuldyzy nominees and winners Orda, KeshU, Ringo and Marzhan Arapbayeva, Tolkyn Zabirova and others were on stage at Kazakhstan Central Concert Hall for the ceremony. The headliner of the gala concert was a special guest, popular Ukrainian singer Jamala.

“The victory for us is a double celebration. To be nominated for such a prestigious competition was an achievement already and the fact that we were considered the best is a great victory for us,” members of MuzArt said.