Zhamilya Serkebayeva is more than just one of the most acclaimed classical violinists in Kazakhstan. She bridges the gap between classical and rock, and even shows her skills at lounge music. 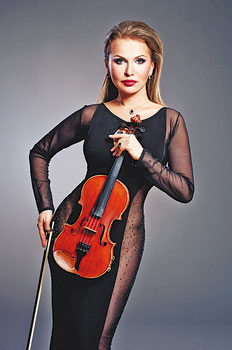 Zhamilya Serkebayeva, one of the most popular violinists in Kazakhstan, shares her life story and gives some exclusive advice for future talents.

“Music in Kazakhstan, like everywhere else today, is perceived by what the audience sees, and not what it hears, unfortunately,” composer and musical producer Alexander Shevchenko told EdgeKz. “It has become a source of income at private parties and events and that’s sad.” However, Zhamilya stands out from everyone else. “She is probably the only violinist in Kazakhstan who can represent our country at the top international level,” Shevchenko said.

Stunningly attractive, Zhamilya has already won the highest honors in her own country and around the world. She is an Honored Artist of Kazakhstan and won the Monte Carlo International Festival’s First Violin award in 2004.The cosmopolitan, globe-trotting Zhamilya is even a member of the New York Jazz Association. She is famed for successfully mixing jazz, funk rock and lounge music with the traditional Kazakh music. Her style on stage combines a virtuoso violin technique with free improvisation. Just add limitless creativity, charm and stunning supermodel beauty and you have a classical superstar with the popular touch.

Introduction to the Violin

Zhamilya comes from a family of musicians: It’s in her blood. “My father loves music,” she told EdgeKz in an interview. “Our whole family is musical, my father is a conductor, my uncle is a singer and since my childhood, my dad dedicated me to music, to see how I would do.” Her father was right. At the age of seven, Zhamilya went to the Kulyash Baisseitova Special Music School for Gifted Children in Almaty where she spent up to six hours a day playing the violin. It paid off.

“In eighth grade, my skills outperformed all my peers and all teachers saw it. So I was treated differently and I felt proud of myself. I was encouraged to do even better, that’s when I got that desire, the will to become a professional musician. I was so dedicated by then that I couldn’t even imagine my life without the violin. I played more and more. Even after regular school, I came home and kept playing,” she said. “For Zhamilya, the violin always took first place,” Shevchenko said. She is 200 percent a musician, a professional musician, a third or fourth generation musician. It is in her family tree. She cannot be anything else but a musician. So the violin has always played the top role in her life.”

Zhamilya’s professional career began slowly, one step at a time. A breakthrough came when she performed at a classical concert with the acclaimed American conductor Yun-Sung Chang in 1991when he travelled to Almaty to teach at the musical conservatory there. After graduating from the musical conservatory, Zhamilya embarked on a personal journey of creative growth. In the economically difficult years after Kazakhstan established its national independence at the end of 1991, jobs for a classical violinist were almost impossible to find. But Zhamilya adapted and found new ways to express herself, and she found new music to explore.

She gave a series of concerts jointly with Kazakhstan’s rock band Forest Gump in 1997. Her work was pioneering and broke the barriers of traditional music genres. She mixed her virtuoso violin style with the guitar distortions and rhythmic drum beats of mainstream rock. Nothing like it had ever been heard in the country before. “My genre changed with time,” Zhamilya said. She continued her purely classical performances too and they started to win her international acclaim. In 2004, she was awarded the coveted First Violin award at the Monte Carlo Festival. Yet through all the fame that came her way, the young artist always remained herself. “She is still a fragile, very feminine and charming woman, a great cook and devoted friend. And most importantly she is not stuck up like other stars,” Shevchenko said.

Zhamilya told EdgeKz she has always been determined to live a balanced life and stay close to her loved ones. “In my life, my career never required ultimatums: it never demanded the sacrifice of my family or friends. I always had the time for both my home and my career. I do have to make some trips. I’ve performed in concerts all around the world, but they don’t happen that often so I do get to spend time with my loved ones,” she said.

“I love giving and sharing my love with my close ones. And no one among my friends would say that I am a bad mother,” she added. Zhamilya has a 13-year-old son, Shamil, whom she treasures as much as her music. “We didn’t force him to go into music right away, just as everyone else in the family did,” she said. “He’s great at math and physics and he likes to learn English. He had no interest in music, until recently. But now he has learnt to play the guitar, and plays it often. One of his favorite bands is the Red Hot Chili Peppers. At first I was upset to think that he wasn’t interested in music, but now I see that it’s in his blood too.”

What does it take to become a violinist virtuoso? There is a lot more involved than being committed to the long hours of practice. Zhamilya has her own ideas. “I would like to tell young beginners that they should listen to lots of different kinds of music, and that includes rock, jazz and hip hop,” she said. “But it has to be professionally well done and it has to be felt deeply. It has to be music that leaves something in our hearts. Then later these young talents will be able to express themselves in their own way.”

“Of course, young musical students need to play a lot,” she said. “And always remember that the foundation of any music is the classical. No matter what kind of musician one wants to be, he or she needs to start from a classical base. And most important, any really good musician has to develop as a person. Therefore, study! Education helps.”

Zhamilya is also convinced that every creative artist has to find their own way and their own unique forms of expression. “I want to say that my violin repertoire is unique,” she said. “I am not a classical violinist, I have my own repertoire. It is Kazakh traditional music. I use Kazakh traditional music and make it speak in a Western language that is understandable for both Kazakhs and foreigners. It is modern Kazakh music mixed with jazz, some classical tones, lounge, punk and everything else.”

“There should be no limitations in music,” Zhamilya insists. “Since I live in the modern world and I love Kazakh traditional music, I am thankful that I live in Kazakhstan and have this great opportunity to combine the two.” Zhamilya has a new surprise coming for her many fans in Kazakhstan and around the world. “Another dream of mine that is about to come true is my own vocal album. I have my own songs that I’ve written and want to sing and, of course, I will emphasize the violin,” she said.

Despite her love of Kazakhstan, Zhamilya’s international career has taken off too. “It sounds strange, but foreigners like her music better than locals in Kazakhstan, I think. When I watch them listen to her, I see they’re in a trance. They seem to understand her music so well, not only her music but her cultural message,” Shevchenko said. Passionate about her music, her son, her family and her friends, Zhamilya, says Shevchenko, has given much of herself to others. “I would like to wish her personal happiness. It is a gift from above,” her friend Shevchenko told EdgeKz. “I wish her to have a strong family… and I am always sure she will always find herself at home, appreciated and loved in any corner of this planet.”

This article first appeared in Edge Kazakhstan Magazine (www.edgekz.com) in April 2013 and is reprinted here with permission.