By Alla Dementieva in National Overview on 24 July 2013

ALMATY – Newlyweds in east European and such Oriental countries and China and Vietnam are partial to Hummers and decorated limousines for their wedding motorcades, according to a recent multi-country study on wedding spending habits conducted by the Home Credit Group, one of Europe’s leading providers of consumer finance. 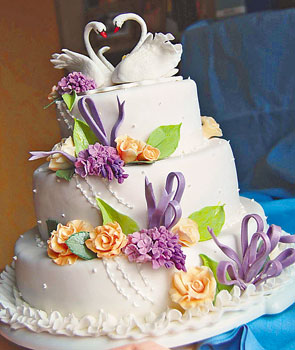 The study focused on the Czech Republic, Slovakia, Belarus, Russia, Kazakhstan, China and Vietnam. And they found newlyweds in post-Soviet states on average spend up to $1,000 to add Hummers and limousines to their wedding parties.

The study looked at a broad range of spending habits relating to weddings and found that on average total wedding costs in the countries studied range from $1,000 in Slovakia to $15,000 in Russia.

One of the most expensive wedding costs is renting space for celebrations. Couples in Russia, for example, spend an average of $10,000 to rent a celebration space. Vietnamese newlyweds pay on average $2,000.

Wedding dresses are also a significant expenditure. According to the study, Chinese brides spend the most at $2,500, followed by Belarus at $1,500. In Russia and Kazakhstan, this figure is around $1,000 and in Vietnam and Slovakia brides pay an average of $300 for a dress. The study also found that Chinese men pay on average $2,000 for their wedding suit, whereas Vietnamese grooms pay an average of $200.

The Chinese also pay more than other countries to decorate their wedding car. They pay on average $850, while Belarus couples pay $100 and Russian couples pay $200. 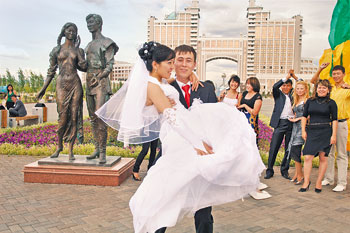 According to the survey, newlyweds in Kazakhstan pay more to organise the wedding feast than in other countries.

Spending on flowers also varies from country to country, ranging from roughly $100-$200. More money is spent, however, on wedding music. Wedding musicians are paid an average of $400-$3,000.

Honeymoons also pose a significant cost to couples. Couples in Kazakhstan and Vietnam spend an average $1,000-$2,500 on their honeymoons. Newlyweds in Russia and Slovakia spend on average $5,000.

The study also found that only 29 percent of newlyweds are able to pay the full costs of their weddings and that the majority of newlyweds receive financial support from their parents.

When sufficient funds for weddings can’t be found, the study determined that couples in Russia, Kazakhstan, Vietnam and Belarus are more willing to take out loans to pay for weddings than couples in Europe who rarely do so. The loan terms for wedding costs range from one to two years.

Wedding guests also take out loans to pay for gifts, according to the study. The most popular wedding presents bought on credit are household appliances, video and audio equipment.