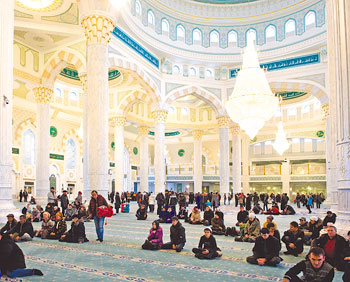 As the state respects religious freedom, muslims in Kazakhstan can observe the significant rituals of their faith. One of these rituals is fasting during Ramadan.

ASTANA – Kazakhstan’s constitution proclaims it a secular state: Article 1.1 reads “1. The Republic of Kazakhstan proclaims itself a democratic, secular, legal and social state whose highest values are an individual, his life, rights and freedoms.” Though the state respects religious freedom and does not espouse any particular faith, the majority of its population, about 70 percent, are Sunni Muslim, and the devout among them adhere to the significant rituals of their faith. One of these rituals is the fast for Ramadan.

Ramadan, the holy month for faithful Muslims, began on July 9 this year. Ramadan is a month of obligatory fasting (Saum) for Muslims, and one of the five pillars of Islam. People of all ages fast through the hot summer days as a demonstration of their beliefs. During Ramadan, faithful Muslims refrain from eating and drinking (with some exceptions, often for water) between sunrise and sunset, and may also abstain from smoking and other activities. The fast lasts 29 or 30 days, depending on the lunar calendar.

Not all of Kazakhstan are fasting this month, however. Today, Kazakhstan is a multi-confessional country: 25 percent of believers in the country are Russian Orthodox; Protestant churches, Judaism, Buddhism and other religions are present here and religious belief and the number of religious associations and denominations is growing. A variety of religious denominations have always been present in Kazakhstan: traces of Nestorianism, Buddhism, Zoroastrianism, Tengriism and other ancient creeds have been found here.

In 2005, Kazakhstan established a Committee on Religious Affairs to ensure implementation of citizens’ rights to freedom of religion and strengthen mutual understanding and tolerance between religious groups of different denominations. The necessary legal and organisational conditions for peaceful coexistence of different religions have been elaborated and a unified state policy in the field of religion has been formed on the principles of separation of religion from the state, freedom of conscience and freedom of religion, equality of religious organisations, non-interference of the state in the internal activities of religious associations and cooperation between the state and religious associations.

Realising the increased role of religion in society, President Nursultan Nazarbayev put forward an initiative to hold a forum of world and traditional religions in Astana. As conceived by the head of state, the dialogue between leaders of world and traditional religions, built on trust and mutual understanding, will open broad prospects for international cooperation in this field and will help overcome such negative phenomena of our time as violence, extremism and terrorism.

“Dialogue is a necessity of life today. It should be based on the recognition of the diversity of the world as a universal value of humanity. Only dialogue based on mutual respect and equality will effectively counteract the rise of intolerance and hostility between different nations and states. The morals of any society are determined by its attitude toward other nations and the cultures of other people. World culture starts from learning how to respect the inherent worth and dignity of some other civilisation, to allow it develop in its traditions,” then-Minister of Foreign Affairs of Kazakhstan Kassym-Jomart Tokayev said at the High-level Conference on Interreligious Cooperation for Peace held in 2006 in New York.