By Nadezhda Khamitova in Culture on 10 July 2013

ASTANA – Kazakhstan sent many of its sons and daughters to fight and die on the front lines of World War II. It also supplied food and ammunition in the common effort against the advancing Nazis. But the country’s role in that historic effort has not been widely recorded. Few history books outside of Kazakhstan chronicle the efforts of this former Soviet republic in that epic struggle. 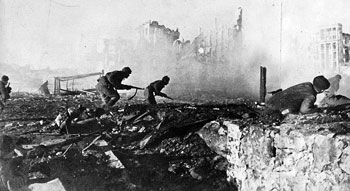 But that may soon change. United States-based researcher Ruth Nielsen recently came to Kazakhstan to discover this country’s role in World War II.

So The Astana Times contacted Nielsen to discuss her findings and her interest in the subject.

For us, the history is well known. But why did you decide to examine Kazakhstan’s role in World War II?

I became interested because so often the Soviet Army of WWII is referred to as the Russian Army. When I was in the USSR, the tourist guides frequently talked about the Russian Army’s role in WWII. One guide emphatically stated, “My mother defended Moscow.”

Why Kazakhstan in particular?

Through my contacts with Kazakhs, because of the research for my doctoral dissertation on the Volga Germans, who were exiled in the 1930’s and en masse in 1941 by Stalin, I heard references to Kazakhstan’s relatives who fought in WWII. For example, there was a “father, who fought to the gates of Berlin” or the grandfather who flew in the air force. I became aware of it having truly been a Soviet Union Army.

Little is known in the West about the contributions of the citizens of the other republics to the war effort. There may be statues in Almaty, but those heroic men and women are unknown elsewhere.

What are your findings and observations? What do you plan to do with the information you have found and do you think there is any chance the West will be interested in our history?

At present, my findings are next to nil. Therefore, there is little I could do with them. On a recent visit, we were going to check out an exhibit at the Nazarbayev Center in Astana, but after touring the first two floors, we ran out of time to continue. It seems there is always an interest in WWII. For example, I just came across a history magazine at my library featuring an article about the role of women in WWII. Some reference was made to the Soviet all-women-night-bomber regiment, aka the Night Witches. But again, most references were about Russian women, such as Lyudmila Pavilchenko.

With the independence of the Commonwealth of Independent States countries, it might be time for more to be known about the WWII contributions of all the former Soviet peoples. It is their history, too.

There is a saying, “History is written by the victors.” The Western world believes in its invaluable contribution to the victory, whereas our part of the world is also confident in our role in the victory. Do you think the Western world will change its point of view and are you pursuing this aim?

You seem to delineate between a Western victory and a Soviet victory. One depended on the other. We were allies. You ask about the Western world changing its point of view. The Allies won; Japan and the Nazis and their partners lost. What is there to change? It seems that that has always been the history. Because the relationship between the West and the Soviets deteriorated and morphed into the Cold War, and the Iron Curtain came down as the Berlin Wall went up, that does not lessen the efforts and the successful outcome of the allied armies over the Japanese and the Nazis.

And the last, but not least question, what is your overall impression of Kazakhstan?

I very much enjoyed my two-week visit. Having a daughter fluent in Russian as a “sputnik,” was a conversation opener. We found people friendly and conversant. We liked all the food, but I did not try any horse meat. My daughter preferred Almaty; I preferred Astana.

Financial transactions were a major problem. We were told you have a cash economy and primarily brought American Express Travelers’ Checks to cash at the banks. Only one bank in Kazakhstan cashes travelers’ checks and that took close to 45 minutes. Credit cards were not acceptable in many stores or they would not take debit cards for which they were not programmed. I have since been in discussion with American Express, Visa and my bank.

The most common Kazakh question was “Why are you here?” and since I have returned home, it has been “Why did you go?” We answered lots of questions about the U.S. (while in Kazakhstan) and at home, I am answering lots of questions about your country. I feel that I am constantly being interviewed by friends and acquaintances to tell them about your people, geography, history, etc.

There is a dearth of information about your country. You have very classy magazines and books, such as “Edge” and “Kazakhstan” by Schreiber and Tredinnick, but they are unfortunately not readily available in bookstores and libraries.