ASTANA – The first regional forum, “The Covenant of Mayors – a Way to Sustainable Energy Development on Local, National and Regional Levels,” was held June 28 in the Palace of Independence. 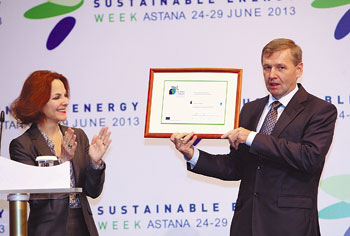 The forum was part of the June 24-29 Sustainable Energy Week Astana and served as a meeting place for industry experts, policy-makers and community representatives to discuss the challenges and benefits of transitioning to a green economy. Participants also exchanged experiences and proposals for addressing climate change.

The Covenant of Mayors is a new European movement involving local and regional authorities in the fight against climate change. It is based on voluntary commitments by signatories to reduce CO2 emissions by 20 percent through increased energy efficiency and the development of renewable energy sources by 2020.

The forum’s opening ceremony was attended by EU Ambassador to Kazakhstan Aurelia Bouchez, Minister of Environment Protection Nurlan Kapparov and Deputy Mayor of Astana Vassilyi Krylov. During the opening speeches, they mentioned some crucial ecological and industrial problems Kazakhstan has to cope with, such as the Aral Sea disaster, consequences of nuclear testing, land erosion and outdated energy infrastructure that is vulnerable to disasters. It is believed that by joining the Covenant of Mayors, the country will be able to decrease negative impacts of human activities, create adequate healthy urban environments, as well as enhance economic competitiveness and greater energy independence.

Kapparov mentioned in his speech that about 60,000 new jobs will be created in a new green economy sector by 2030. Moreover, it is expected that increased energy efficiency will provide an additional three percent GDP growth. Initiated and supported by the European Union, the Covenant of Mayors has already collected 4,700 signatures from European cities. In 2011, Kazakhstan also decided to support cities in Commonwealth of Independent States countries to achieve sustainable energy development beyond the European Union.

“Realizing the importance of this initiative, we decided to support the post-Soviet countries and encourage them to join the Covenant of Mayors. The European Union is ready to share its experience in creating new efficiency infrastructure based on renewable energy sources,” said EU Ambassador to Kazakhstan Aurelia Bouchez. According to Bouchez, after joining the initiative, Kazakhstan will acquire access to new energy saving technologies and additional financial support to implement the conditions of the initiative. Astana and Aksy, in the Pavlodar region, signed onto the Covenant of Mayors this year. The deputy mayors of these cities were awarded certificates during the forum.

Svyatoslav Pavlyuk, a leading expert on the Covenant of Mayors initiative for Central Asia discussed opportunities to join the initiative, as well as the possibility of an energy shortage as the world’s gas-fired and oil-fired power plants reach their peak in 2025.

“There will be a great demand on energy that will dramatically exceed the supply. As a consequence, prices will overreach all permissible rates,” he said. “In order to avoid that, we have to develop a Sustainable Energy Action Plan and adopt local energy policies and administrative arrangements.”

So far, more than 70 cities in the CIS have signed the Covenant of Mayors, including 30 Ukrainian cities.

Pavlyuk also presented positive results that have been achieved by cities in Poland. Over the last couple of years, Poland cut its greenhouse gas emissions by half after putting the country’s economy on a low-emissions track. Pavlyuk believes that Kazakhstan can reach the same goal and reduce its CO2 emissions by a third by 2020.

The Head of the Department for Energy Saving and Energy Efficiency of the Ministry of Environment Protection of Kazakhstan Alibek Kabilbay talked about practical steps to implement the initiative and modernize Kazakhstan’s energy infrastructure. He mentioned that the first Kazakhstan Energy Efficiency Center has been established in Astana, which is a joint Kazakhstan-German project. On the basis of this venture, the mass training of energy auditors will take place. Five Kazakhstan Universities already award bachelors degrees in Energy Management and Energy Audit.

“Taking into account that our biggest enterprises are the greatest consumers of the country’s electricity, we have already started to modernize them. Along with the modernization, a control mechanism was developed, so that enterprises do not follow the plan and our recommendations will have to pay penalties,” said Kabilbay. He also noted the modernization progress that has occurred in Kazakhstan, including the recent launch of the pilot project Green Village being implemented in the Sarybulak Village. Modern technology is used to supply the village’s total energy needs using renewable energy, as well as providing Sarybulak its own supply of clean drinking water.

In general, there are different directions for energy saving policy implementation. In transportation the government is going to encourage bicycling by building bicycle lanes and facilities. Mass bicycling will reduce traffic jams, decrease air pollution and cut road maintenance costs, as well as boost the health of the population. Kazakhstan has also already banned traditional standard light bulbs. By 2017, Astana is going to be fully equipped with light-emitting diodes. Energy efficiency in construction, also known as sustainable building, will also increase energy and water consumption, as well as reduce waste, pollution and environmental degradation. There will also be energy-efficient facilities for enterprises and training courses for energy managers.

Guest speakers from neighbouring Central Asian countries presented their views on energy efficiency and their experiences transitioning to a green economy. According to the representative of the Government Agency for Local Government and Interethnic Relations of the Republic of Kyrgyzstan, Taalaigyl Mamasalyeva, two Kyrgyzstan cities, Osh and Talas, signed the Covenant of Mayors in 2011. During the last two years, Kyrgyzstan has modernized three main hydroelectric power stations and plans to build more. Since the modernizations, Kyrgyzstan has made great progress in providing more energy for its cities.

Tajikistan has just started to progress and has approved a plan for transitioning to a green economy. “Tajikistan is a poor country in oil and gas. That is why renewable sources of energy are a good opportunity for us to improve our economic situation and cover urban energy demand,” said Haknazar Boboyev, Tajikistan’s head of the department for Ecology, Labour Protection and Technologies of the Ministry of Industry and New Technologies. The Tajik government is planning to construct windmills and solar power plants as mountains cover 93 percent of Tajikistan’s surface area.

Chair of non-governmental organization Ynanch-Vepa, Guldzhamal Nurmuhammedova, shared Turkmenistan’s view on the topic. Being the fourth largest gas producer in the world, gas plants are the major suppliers of energy in the country. However, Turkmenistan recently launched a pilot programme to build a solar power plant. The country’s priority task now is to prepare the legal framework for the transition to a green economy.

A representative from Tashkent, Uzbekistan Alimdzhan Rahimov said heat energy complexes in his country need to be modernized because they have not been upgraded since their construction in the 1980s. Uzbekistan would also like to modernize residential buildings. Uzbekistan is currently seeking foreign investment to begin transitioning to a green economy next year.

The forum was also attended by municipal housing industry representatives who play an important role in the promotion of energy saving policies. One of the initiatives they helped establish is the national campaign “Energy Saving and Energy Efficiency – the Basis for Green Economy in Kazakhstan.” This campaign includes a wide range of measures to involve the population in tackling the energy saving issue. “It is a great day and a great start for us! This initiative, the Covenant of Mayors, is a chance to join a healthy sustainable global community,” said Saltanat Rahymbekova, counselor of the Municipal Housing Economy of Kazakhstan. “Our Government is still working on the financial side of the plan. But once it is approved, I think that will be in August, we will start to implement the conditions of the Covenant of Mayors.”

The Covenant of Mayors was adopted in 2008 by the European Commission to endorse and support local authorities to implement sustainable energy policies. Being the only movement of its kind, involving both local and regional actors around the fulfillment of ecological objectives, the Covenant of Mayors is a model of multi-level governance. And now the EU Commission has decided to support the participation of the Eastern Partnership and Central Asian cities in the Covenant of Mayors East, which covers all CIS countries. This means that the EU is going to help local authorities from these regions to deal with sustainable energy planning and support the preparation of their Sustainable Energy Action Plans. It is known that post-Soviet countries suffer from a general low awareness on energy-saving issues. From now on, cities which have signed the Covenant of Mayors will get the opportunity to benefit from European experience in transitioning to a green economy to reduce dependency on fossil fuels and to improve energy supply security.