Oskemen Ethnic Village a Place of Education, Investment in the Future 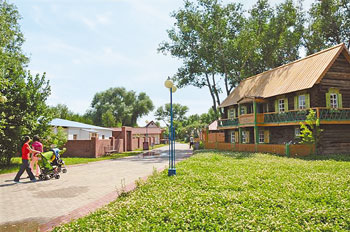 OSKEMEN – East Kazakhstan oblast, where people from 105 different ethnicities live and work together, is an appropriate setting for Kazakhstan’s first so called ethnic village, which opened in 2010. The ethnic village is a microcosm of a harmonious society, reflecting the ethnic diversity of the region and the country and presenting its diversity as an important factor for the development of friendships and positive relations with neighbours. East Kazakhstan has a solid foundation of progress and interpenetration of different cultures, languages, traditions and customs.

It is symbolic that the presentation of the ethnic village was held in September 2010, during the Seventh Forum of Inter-Regional Cooperation between Kazakhstan and Russia. Its first honorary guest was President Nursultan Nazarbayev. The creation of the village was a confirmation of the Kazakh president’s policies, which aim at comprehensive development, harmonising inter-ethnic and interfaith relations and establishing a direct and open dialogue. Foreign delegations from the CIS as well as distant nations visiting the village noted the novelty of the idea and the continuity of traditions.

The east Kazakhstan region has been the initiator of many ideas in inter-ethnic dialogue and social consensus. Here in 1992, Nazarbayev personally opened the first House of Friendship, which last year marked its 20th birthday. Today, the House of Friendship and the ethnic village are educational centres promoting friendship and harmony, where young people are brought up to respect different cultures. 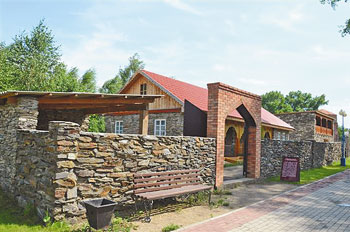 The village has its own square and a conference hall in the shape of yurt for hosting important events. On June 22, they organised the third regional competition of folk music. Amateur artists from all cities and districts took part in the competition, competing in dombra, accordeon and instrumental ensemble categories.

Recently, the ethnic village hosted the meeting of the Assembly of of the People of Kazakhstan. One result of the meeting was a decision to increase funding for the House of Friendship by 50 percent. Most of the funding for maintenance and other financial needs come from the government budget, but this is seen as an investment in the future.

The ethnic village is an integral part of the cultural resources that make up the museum reserve. There are also exhibition halls, monuments of the past, a zoo and a boat station in the area, as well as about 500 species of plants, 300 of them rare species.