ALMATY REGION – A new passenger train service to Alakol Lake was launched on June 19. The train will run twice a week from Almaty to Dostyk until the end of the tourist season at the end of August. 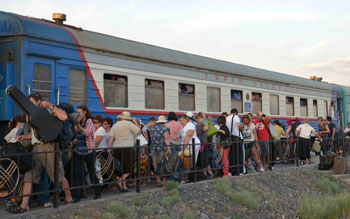 A new passenger train launched on June 19 will be carrying tourists and business travelers to Lake Alakol, a well-known resort near the border with China.

A festival called Alakol Wave marked the launch of the new service and included a concert by well-known Almaty singer Alexander Tsoi, the premiere of the film “Okunkol,” as well as contests and games with prizes.

The Alakol Lake (in Kazakh “Motley Lake”) is a unique place at the intersection of two regions: Almaty and east Kazakhstan. The lake is multicolored. Its salty water is turquoise in the morning and sky-blue in the evening and has a high content of minerals. Doctors say that after two or three days of swimming in the lake, skin wounds heal and patients suffering from sciatica experience a reduction in lower back pain. The black pebbles on the lake’s shore are believed to have the same therapeutic effect. Its water is much warmer than Issyk-Kul Lake, especially in the evening, and swimming begins in mid-June.

In 1998, the Alakol State Nature Reserve was created on the archipelago of three islands in the central part of the lake. There are a lot of interesting birds in these wild places untouched by civilization, including red-listed relict gulls in the Araltobe island.

No less amazing are the places surrounding the lake, such as Canyon Zhamanty with its unique gallery of petroglyphs and therapy sulfur mud of the Zhalanashkol radon lake. Visitors can also visit Zhabyktau Mountain, which is a finite segment of Dzhungar Alatau offering a magnificent view of the lake.

The Alakol is gaining in popularity and this resort zone has the potential to become a popular tourist complex. In July and August, all hotel rooms around the lake are usually filled and booked in advance. Room prices start at about 4,000 tenge ($26) a day and approximately 300,000 tourists visit the area each year.