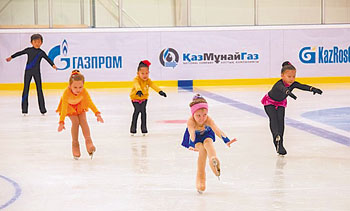 The rink, known as Tarlan, took nine months to construct and utilizes the latest technology.

“The quality of the ice cover is high, it doesn’t need defrosting… We also want to note that our arena is energy efficient,” said Caspian Foundation Representative Gaziz Shakhanov. The rink is a result of the efforts of the Caspian Sport Development Foundation.

The rink’s design also reminds some of an iceberg.

The project was funded in large measure by the joint venture KazRosGaz LLP, which has invested $10 million in the rink and has presented it to the city of Astana as a gift for the capital’s 15th anniversary. KazRosGaz also funded the construction of the Kairat Football Club Academy.