ASTANA — More than 500 performers and craftsman from around Central Asia converged on Astana this week to celebrate the city’s 15th anniversary as the nation’s capital. The artisans were part of the celebration’s Millennium Around Astana Festival, which showcased traditions and cultures from the region’s traditional nomadic life.

The festival, which ran from July 4 to July 7, had the appearance of a village on market day: horses and camels walked by, tightrope walkers and acrobats did tricks just above eye level, the sounds of traditional music rose and fell and a man in traditional dress stood amid his carpet-making materials.

Asan Raimkulov, a rug maker from the Kazakh-Kyrgyzstan border region, is among the craftsmen invited to take part in the festival. He has been a rug maker for 10 years and learned the craft from his mother.

“This is one of the most important materials in nomadic life,” he said, looking at the rugs and piles of wool in his stall, “because it is used to cover the floor and the walls of the yurt.”

He makes his rugs traditionally, laying out the wool in a pattern, pouring boiling water over it and then walking on it to press it down. A brown and white rug was in the middle of this process when a reporter visited, with fluffy wool twisted into a repeating pattern to form a border around a central panel of circular symbols, waiting for the water and pressure that would flatten it. “We were invited by the Akimat of Astana in order to remind the young generation of our traditional craft,” Raimkulov said.

Raimkulov is one of over 500 artisans from more than 10 countries who came to the festival. There were traditional crafts on display, as well as works of art made with newly-patented processes. The festival featured multi-generational artists and those who discovered, in the difficult aftermath of the Soviet Union’s collapse, that a return to working with their hands was the only way to put food on the table. 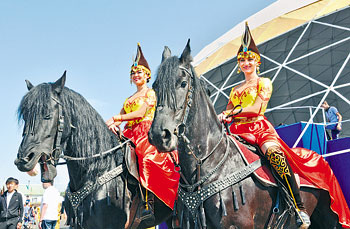 Farida Umerbayeva from Semipalatinsk comes from a family of craftsman. She makes felt wall hangings in pastel colours, dolls and costumes and other crafts. Her husband works with wood and leather. “I watched grandmothers doing this for a really long time. That’s why I became interested in it. I was a geography teacher, but I decided to leave and dedicate my life to this.” She and her husband have been in business for ten years.

Nearby, Zhadyra Okenova from Almaty sold similar crafts made by her mother. Among her wares were kamcha (whips), torsik (a canteen for the traditional dairy drinks kumiss and shubat) and kalkan (shields), all significant components of traditional life on the steppe.

Magripa Omarova’s art is also a family affair. Her mother was an artist, she said, and now her daughter is, too. Omarova learned craft-making from her mother and grandmother first, then studied art at university in Almaty. Now she makes souvenirs like felt slippers and purses, as well as felt and embroidered wall hangings and torsik.

One of her striking embroidery-painting shows two horses and riders flying across the steppe. “I use images of Kazakhstan’s nature, as well as our traditions,” she said of her inspiration. “For example, here’s the Kyz Kuu game (catch the girl), a horse-racing game in which the victor’s reward is often a kiss. And also the reality of Kazakh life – like an old couple sitting in front of a yurt.”

For Boris Danyilkin, whose stone and silver jewellery was displayed in one of the festival’s yurts, the sudden transformation into a craftsman was less about following an artistic dream than seeking a source of sustenance for his family. The Siberian, who has a wife from Kazakhstan and lives in Almaty, was working at a geology centre when the Soviet Union collapsed, taking his job and income with it. Accumulating debt, he had to find a new way to earn money. “I sat down and started to create without ever having studied how to make jewellery. It was our only source of income,” he said.

The traditional role of a craftsman became an economic lifeline into the post-independence world for Danyilkin and his family. Danyilkin now has employees and a shop and has made a success of the jewellery business he started back in the early 1990s. He uses Russian and Kazakh stones and silver to make abstract and nature-based designs. His inspiration comes from his materials. “The stones give me the desire to work and the strength,” said the scientist-turned-artist. 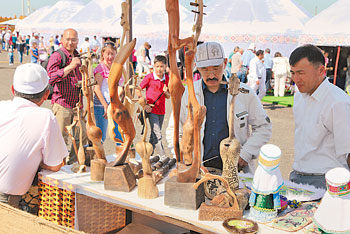 The work of Kostanay-based artistan Arlan Ankanov is inspired by natural images and traditional designs and depicts Kazakh motifs and life on the steppe in dramatically contrasting colours. Though traditional in appearance, the pieces are created using a new technique patented by the artist himself.

“No one uses this technology. This is fine-cut Australian sheep hair. I press the hair and then glue it on the canvas, so it looks soft but when you touch it, you can feel that it is as hard as the stone.”

For most of the artisans at the festival, the objects that were once crucial to the life of a nomad still make an important contribution to their daily sustenance – but now they’re no longer used for hunting or defence, but to generate income for the small and medium-sized businesses the artisans run, which have been called vital for the country’s future economy. Sons and daughters still learn from mothers and fathers how to shape leather and press wool – and also balance the books.

In a yurt near the festival’s entrance, was the Ak Azeler Vocal Ensemble. The group of singers from Astana performed on July 6. The women of this ensemble are all between 48 to 75 years old and have been singing together for six years. They sing lullabies, mother’s songs and love songs at holiday concerts around the country. “We like to sing about love. We are young forever!” said singer Tursunay Aitalyeva. The group’s white, embellished headdresses and traditional Kazakh costumes were made by the singers themselves.

The Ak Azeler group shared the stage with a variety of other traditional performers over the days of the festival. There were dombra and kobyz players, folk singers and folk instrument ensembles. A trio in leather and furs told a wordless story of the steppe, singing and using vocal effects to create the yipping of wolves and the galloping of horses. A group dressed all in black used traditional throat singing to provide the beat for a pop dance performance, while other young dance groups performed traditional steps from the region.

The festival was meant to show that tradition and modern living survive side-by-side in Kazakhstan.