By Raushan Shulembayeva in Culture on 24 July 2013 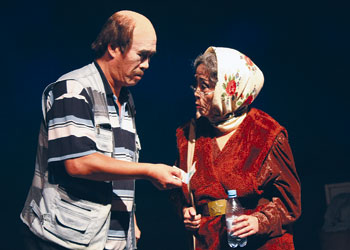 ASTANA – The play by famous Kazakh film director and playwright Lavrenti Son premiered on the stage of the State National Korean Theater of Musical Comedy.

According to the author, the story of two people with the same name, but very different in character, really took place in the 1960s in one of the state farms of the sandy Moiynkum district in the South Kazakhstan oblast.

A simple story described by Lavrenti Son in his mild, intelligent, ironic and at the same time optimistic manner, first made the audience laugh, then think differently about usual things. 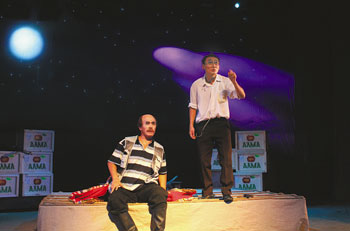 Production director Roman Tsoi masterfully conveyed the important social implication conceived by the author. The comedy full of passions, which exposes different sides of human nature, in the end, turned out to be a performance with a deep meaning and faith in the triumph of good.

The heroes of the play – a young teacher of physics, idealist Oleg Kim (the first serious role of a young actor Boris Yugai), who came to the village from Almaty to teach children, and his homonym – a greedy local Dmitry Kim (Roman Tsoi) are opponents. In the plot of the play they got stuck in the desert and had to spend the night in the steppe. A candid conversation under the stars helped them take a fresh look at each other and rethink the past life.

Their life-affirming optimism unwittingly inspires and together with the heroes of the play each viewer is made to want to believe in an invincible good origin in man.