The main objectives of the Kazakhstan Institute for Strategic Studies (KazISS) formulated at its creation are still relevant today: the development of theoretical foundations and practical recommendations in the areas of foreign policy and international security, the analysis of global financial and economic systems and their impact on the economic security of the country and the state and trends of the social and socio-political development of Kazakhstan’s society. 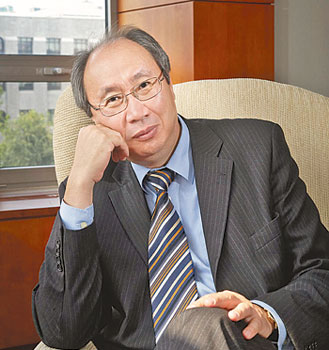 Another priority activity is to inform local and foreign experts and the scientific community about the work of our scientists on issues of foreign and domestic policy, economic security, social and political development and real and presumed global and regional threats and challenges.

For this purpose, the institute publishes scientific journals in three languages: the Kazakh Qogam zhane Dauіr, the Russian Kazakhstan-Spectrum and the English Central Asia’s Affairs. The most relevant Kazakhstan news and analytical materials of our experts are also available on our website in Kazakh, Russian and English.

We attach great importance to the expansion of contacts with leading international centres. Agreements of cooperation have been signed with 38 scientific and expert-analytical structures.

KazISS annually conducts a large number of scientific conferences, seminars and round tables which involve experts from Azerbaijan, Belarus, Germany, India, Iran, China, South Korea, Kyrgyzstan, Pakistan, Russia, the UK, the US, Tajikistan, Turkey, Uzbekistan, France, Japan and others. In 2012 alone, our experts presented about 190 reports at foreign and domestic forums.

Time zips along, and new expert-analytical structures have emerged and successfully come into operation in the country, many of which at one time branched off from KazISS: the Institute of Kazakhstan’s Development, the Kazakhstan information-analytical centre, the Ministry of Foreign Affairs Centre for Foreign Policy and Analysis, the Institute for Support of Democracy, the Institute of World Economics and Politics under the Foundation of the First President of the Republic of Kazakhstan and others. We support scientific and working relationships with them. The need to unite the efforts of political scientists, lawyers, sociologists and philosophers to understand fundamental economic and political changes at the global and regional levels is increasing rapidly.

In this context, I would like to draw attention to the changing nature of major trends in the global economy. In connection with the information and communication revolution, there is no way of development, except through industry and innovation. Those countries that cannot adapt to the demands of globalisation will inevitably be pushed to the margins of global development and remain only as suppliers of raw materials and cheap labour.

According to experts, the main engines of global economic growth in the short term will be China and India.

In the 21st century, dramatic changes are gaining pace not only in the world economy – we are also witnessing the change of the global political system. International organisations and international laws created by the West in the twentieth century mainly for the interests of Western countries are failing in the realities of the 21st century. The unipolar world, which emerged in the late twentieth century, is passing. The world is becoming more polycentric. This must be taken into account in our foreign policy and foreign economic activity. Strategy Kazakhstan 2050 pays special attention to the global demographic imbalance. Indeed, if in 1804 the world’s population was one billion people, in 1959 the figure was already three billion, and in 2011 it reached seven billion. It is predicted that in 2025 and 2050 the population will increase from eight to nine billion people, with the largest population growth on the Asian continent.

In this regard, I would like to note the following. Now the world’s attention is focused on Afghanistan, mainly because of the forthcoming withdrawal of NATO troops from the country. The West offers different models for the reconstruction of Afghanistan’s economy, including through the integration of Central and South Asian countries under the project, “A New Silk Road,” initiated by the U.S. However, we should keep in mind that despite the tragic events, there are significant demographic changes occurring in this country. In 1989, its population was 16.4 million people; in 2011 the figure reached 28 million. The unemployment rate in the republic approached 40 percent, the literacy rate for men is 43 percent and 12 percent for women. The majority of people are not Pashtuns, but Uzbeks, Tajiks and ethnic groups residing mainly in the northern provinces of the country. Moreover, it is possible that integration projects in Central and South Asia may cause crowds of migrants to flow from there.

Another alarming factor is that the Wahhabi religious groups, including Hizb ut-Tahrir, have over the years deliberately concentrated forces in areas with oil and gas, and not only in the North Caucasus, Siberia, Tatarstan, Bashkortostan and northern Russia, but even here in Kazakhstan.

In view of the changing situation in the world, the Kazakhstan 2050 strategy clearly sets the priorities of our country’s foreign policy. First is the development of partnerships and good relationships with our territorial neighbours, Russia, China and the Central Asian countries. It is quite logical. Any country in the world is committed primarily to establishing friendly and mutually beneficial and predictable relations with its neighbours.

The next priority of Kazakhstan’s foreign policy is partnerships with the US, the European Union (EU) and Asian countries. These activities are also quite understandable. Kazakhstan is pursuing a multi-vector external policy as a bridge between East and West, between Christian and Islamic civilisations and between the western centres of economy, finance and politics and rapidly emerging Asian powers.

The expert community supports the policy of the president of Kazakhstan to strengthen the Customs Union and the Common Economic Space and to establish in the near future the Eurasian Economic Union.

Finally, we must take into consideration that the upcoming withdrawal of NATO troops from Afghanistan in 2014, which has accumulated a large number of problems, may pose a threat to neighbouring states. Suffice it to mention only one fact: now there are about 1,900 different gangs in Afghanistan with up to 20,000 militants, including a significant number of immigrants from Kyrgyzstan, Tajikistan, Uzbekistan, Russia’s Chechnya and China’s Xinjiang. It is highly questionable in what direction they will go after 2014. Experts say that some of these gangs will attempt to break into a gem of the region – the Fergana valley.

In this regard, the need to strengthen security in Kazakhstan is understandable and reasonable. With the withdrawal of the NATO forces from Afghanistan it is appropriate to create a safety barrier and anti-drug belt along the borders of Central Asia with the participation of all interested states and such international organisations as the UN, the Organisation for Security and Cooperation in Europe, NATO, the Collective Security Treaty Organisation, the Shanghai Cooperation Organisation and the Conference on Interaction and Confidence-Building Measures in Asia.

The author is director of KazISS, Doctor of Historical Sciences, Professor Emeritus of Shanghai University of International Studies. The Kazakh Institute for Strategic Studies (KazISS) under the Kazakhstan President was established by presidential decree on June 16, 1993.