ASTANA – Members of Kazakhstan’s Mobilex Racing Team Kanat Shagirov and Alexander Moroz helped extinguish a fire in one of their competitors’ cars at the Silk Way Rally, losing some time. During the first special section of the second stage of the race, the whole of which runs from Moscow to Astrakhan, car 130, belonging to the Russian team Virage, flamed up. The Kazakhstan team members stopped to help put out the flames and assist Russian competitors Maxim Kirilev and Vadim Shmailov. Details of the accident are still unknown. 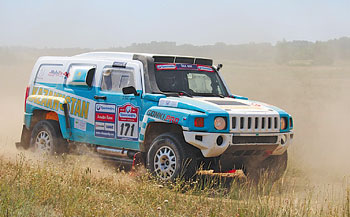 Currently, the third stage of the international rally, from Volgograd to Astrakhan, is taking place. The second stage of 546.77 kilometres, including a special section of 478.38 kilometres, finished on July 8.

Kazakhstan’s Mobilex Racing Team, Yury Sazonov and Arslan Sahimov (car 170), in a Hummer H3 Evo 5, were the 17th to come to the finish line, and Kanat Shagirov and Alexander Moroz (car 171), driving a Hummer H3 Evo 6, completed the stage in 30th position.

Bauyrzhan Issabaev and Stanislav Podolyanyuk of Team Astana (car 123) were 13th; their teammates Aydin Rakhimbaev and Gabdulla Ashimov (car 114) were 18th. Zhanat Zhalimbetov and Murat Nussimbekov, members of the Off Road Kazakhstan team in a Nissan Patrol (car 173) were the 20th to finish and Andrey Cherednikov and Dmitry Tsyro in an SUV Hummer H3 (car 154) were 28th.

Only 39 of the 75 SUVs that started reached the finish line of the second stage. Vassilyev’s second-stage-winning crew was one of the leaders in the overall SUV standings and they are 3 minutes and 37 seconds ahead of the Frenchman Gachet. Third place overall, with a delay of 18 minutes and 45 seconds, was occupied by Frenchman Jean-Louis Schlesser and Russian Konstantin Zhiltsov.

In the truck race, KamAZ, driven by Andrei Karginov, won. Second and third place were occupied by KamAZ representatives Ayrat Mardeyev and Dmitry Sotnikov. Arthur Ardavichus of Team Astana was 18th. In the overall standings, Mardeyev at 6 minutes and 26 seconds ahead of Anton Shibalov’s crew, and 24 minutes and 52 seconds ahead of the Karginov crew. After two stages, Ardavichus took 15th position with a delay of 3 hours 44 minutes and 23 seconds.

Earlier, Shagirov and Moroz (car 171) were 38th to finish the first stage of the race, between Tambov to Volgograd. They travelled 744 kilometres, including 373 kilometres of a special section, in 6 hours, 25 minutes and 11 seconds. The crew is in the category T1 in a Hummer H3 Evo 6.

The first stage of the race was 744.12 kilometres, 373.43 kilometres of which had special sections.

“The race is hard. I did not think that it would be so difficult, but we are at the finish. The car is super. Today, we did not go at 100 percent; we got acquainted with its control system. Tomorrow we will try to increase the pace. Maybe today we’ll change the settings on the car that did not satisfy us during the race. At this stage, the task wasn’t to win, the task was to get acquainted with the cars,” Sazonov said after finishing the first stage of the race.

“The first day, consisting of two special sections, was very serious. We completed our main task for today: we finished with a good result. And most importantly, we kept our technique, although there were plenty of chances to make a mistake,” Sazonov’s navigator, Sahimov, added.