Foreign experts are interested in Kazakhstan not only as a template of economic growth and political stability, but also as an important participant in the integration processes of the Eurasian space. In the run-up to Astana’s anniversary as the country’s capital on July 6, Alexei Maslov, head of the Department of Oriental Studies and professor at the National Research University with the Higher School of Economics in the Russian Federation, visited the Kazakh capital. This reporter met him for an interview. 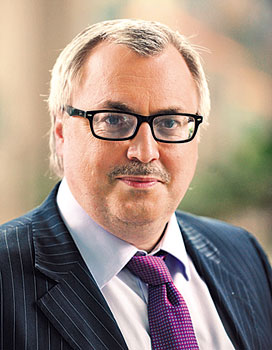 In Strategy Kazakhstan 2050, President Nursultan Nazarbayev mentioned the third industrial revolution as one of the global challenges of this century. How do you think it will happen and what steps should Kazakhstan take?

As a matter of fact, rather than the industrial revolution, we talk of radical transformation of the structure of the economy and industry of the world. It is primarily due to the depletion of natural resources so global and significant that nearly all the countries in one way or another will be short of hydrocarbons. Alongside them are a number of nations where they are in excess, who will be the key players in the market but at the same time face claims set to them by other countries.

Kazakhstan is one such state. Given its proximity to China, whose demand for hydrocarbons is growing, there are only two options: continuous production increase and ultimately depletion of practically all the oil, gas and coal resources; or transition to alternative energy sources, not just offshore gas, which many countries are increasingly opting for, but also the use of wind and solar energy. Most experts suggest that mass transition from traditional to alternative sources will not happen. It is in the interests of many countries possessing large oil resources to uphold high prices on traditional energy sources.

And, to the credit of Kazakhstan, rich in hydrocarbons, it has started its transition to new energy sources. That is right, as the new industrialisation is not in expanding hydrocarbons production, but in increasing new sources of energy, innovative technologies and training of new staff.

And yet, according to expert estimations, Kazakhstan’s uranium deposits would last for 50 years, and oil for another 100 years. Isn’t it premature to look for an alternative to them?

I believe the colossal hydrocarbon reserves could bring about setbacks in the economic development of the country. Let me explain why. Fast money from oil and gas sales relaxes the economy and the population, especially now that the oil is sold on credit – money is paid first and then hydrocarbons are supplied. The ease with which all this is done may relax the economy and lead to a reluctance to encumber life with other projects.

Therefore, gradually stepping away from dependence on oil and gas sales alone is largely a pledge of sustainability in the future.

The second point has to do with the environment. Oil production results in enormous environmental problems, which are practically impossible to be fully tackled; you can only reduce the threat. Entire regions lose their economic value after hydrocarbon development, as due to soil degradation they become unfit for crop and animal farming.

The third point is the image and political will of the state’s leader. True, your country has hydrocarbons aplenty, and there is no immediate need to shift to alternative energy sources. But the country would thus put itself in opposition to global trends, and as we know, Kazakhstan and its leader are trying to keep abreast of progress.

Fourth, Kazakhstan has made the right choice, because we must not resist the transition to alternative energy sources, but benefit from it instead. A simple example: China produces a variety of wind energy devices. You could set up a joint venture to produce them, build wind power plants and, given the natural potential of Kazakhstan, supply energy not only to the internal market, but also to the whole of Central Asia and Russia.

Do you share the view of some experts that Kazakhstan can rank among the so-called Asian tigers?

I think that Kazakhstan is on the way to it. The indicator of the Asian tigers is not so much the growth of GDP as of industry and the creation of their own innovative ventures, and then self-sufficiency, i.e. the provision of food, health, education, and also help to other countries of the region.

One more indicator is political clout. Kazakhstan is a major player in Central Asian policy, and it has a good standing in the world, judging by the votes at the UN and UNESCO’s support of Kazakhstan’s initiatives.

You once used the term “Kazakhstan renaissance.” What do you mean by that?

“Kazakhstan renaissance” is not so much my term, but that of foreign analysts. I imply by it the creation of innovative industry, supporting old industrial complexes and mining at that, and the national policy of tolerance, which I believe to be more effective than the European policy of multiculturalism; the creation of a new education system, such as the Bolashak overseas training programme and finally cross-border settlement and an absence of border disputes with neighbours.