By Aigul Turysbekova in Business on 24 July 2013

ALMATY – MERIDA-KZ, LLP in Kapshagay located 60 kilometres from Almaty is the only enterprise in Kazakhstan and Central Asia that manufactures modern bicycles with a production volume of 10,000 bikes per year. 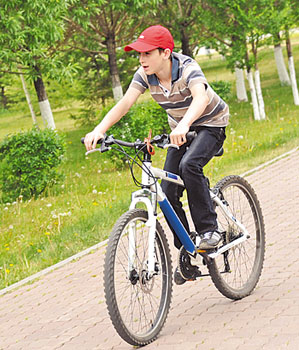 The company was created with the participation of the Samruk Kazyna National Welfare Fund, which invested in the project through one of its venture capital funds. In January, the company received a CT-KZ certificate and was registered as one of Samruk-Kazyna’s domestic producers.

“The development and design of models is carried out by the owner of the brand. All components are purchased in Japan, South China, Taiwan, Malaysia and partly from European and American manufacturers, and the assembly is organized locally,” said MERIDA-KZ, LLP Director Marat Akyngaziev.

“I can assure all the people in Kazakhstan that the components installed on our 2013 models were supplied to us directly from world famous manufacturers, and we do not have fakes. And we are ready to produce much more than 24 new models of bicycles,” Akyngaziev said.

The Kazakh company is ready not only to meet current demand, but also to work on specialized custom models.

The advantage of a domestic producer is that it can offer the best cost/quality ratio. The 2013 lineup includes 24 models of high-quality bicycles. Their components are superior in many respects to analogues of many popular brands.

About 98 percent of producers in the world market are now working on this principle. The share of Kazakh content in different brands of bikes varies from 51 percent to 62 percent.

The immediate objective of the company is to reach a level of quality required for export and to first to supply its products to buyers in the Commonwealth of Independent States. The company says it will be difficult, but possible, to compete with China.

“I would like to note that our share in the payroll budget is formed from packaging and transport costs. Our bicycles are produced under the brand name NOMAD, which has an international registration in the segment of production,” Akyngaziev said.