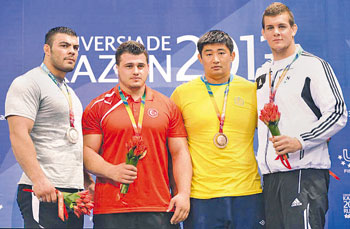 One of the Kazakh wrestlers, Nurmakhan Tynaliyev (second from right) demonstrated his skills and took an honorable third place.

ASTANA – Kazakhstan’s national youth and student team finished in the top 20 at the July 6 through July 17 international Universiade competition in Kazan, Russia.

The Universiade is an international multisport event for university students put on by the International University Sports Federation. More than 11,700 athletes from 160 countries participated in this year’s games and were awarded a total of 350 sets of metals.

The Kazakhstan national team won 30 medals in various events and finished 19th in the medal standings. 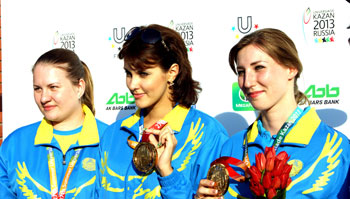 The Russian team placed first in the overall standings followed by China and Japan.

Prior to Kazan, the best finish by Kazakhstan’s student and youth Universiade national team was in 2007 in Bangkok where the team won 14 medals, including five gold and placed 11th in the overall standings.

According to preliminary estimates, the Universiade cost Russia $7 billion. The next summer games will be held in 2015 in the Korean city of Gwangju. And Almaty will host the Winter Universiade in 2017.