ASTANA – The Kazakh-British Business Forum held on July 1 at the Palace of Independence saw the signing of ten memoranda of understanding or cooperation agreements between Kazakh and British organisations, which, along with four others signed in the course of British Prime Minister David Cameron’s current visit, amount to over US$1 billion. 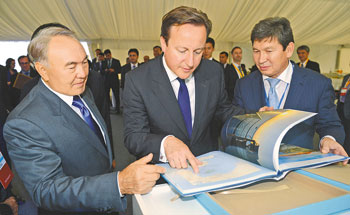 The forum also brought assurances of increased cooperation in many sectors, including education. It was announced following the forum that seven British companies had agreed to take trainees as part of Kazakhstan’s Bolashak scholarship programme, which pays for Kazakhstan’s best students and mid-level professionals to study overseas.

Three round-table discussions were held as part of the forum, including achieving a balanced economy, developing knowledge partnerships and enhancing investment attractiveness by improving the business environment. Reporting on the results of the round tables, Michael Ridley, sales and marketing director of BEL Valves, said of the balanced economy round table that there was significant ease of doing business in Kazakhstan, as well as a good fit between British technology and need in Kazakhstan.

Sir David Wootton, co-chair of the U.K.-Kazakh Trade Council and partner at Allen and Overy, noted that the investment attractiveness roundtable had a “frank and full” discussion that touched on the desire for change in the regulatory environment in Kazakhstan, including streamlining of work permit and business visa applications, but also noted much fruitful cooperation in progress. He said the participants’ main task was to go back to the U.K. and try to bridge the perception gap between people who have been to Kazakhstan and those who haven’t in order to create a climate of confidence about doing business in Kazakhstan. He also said that more frequent and higher-level discussions between Kazakhstan and British businesses would help foster businesses relationships.

Fiona Wolf, partner at CMS Cameron McKenna, reiterated a conclusion of her round table that the UK’s economic recovery would have to be “export-led” and come not from the currently stagnant Eurozone, but from economies, like Kazakhstan, that are growing rapidly.

Peter Howes, Managing Director of the Samruk Kazyna National Welfare Fund, stressed that Kaznex Invest, Kazakhstan’s investment promotion arm, was interested in small and medium-sized projects, not only large ones. “We want to hear from everyone who wants to invest,” he said, adding that it was very easy to make first contact with them. He said that the organisation was actively working to improve its English-language online presence and contact options.

Ben Godwin, regional director of Dando Drilling International, which signed a tri-part memorandum of understanding with Kazgeology and Kaznex Invest, said the forum had “galvanised things.” Dando Drilling International is working on two projects, one to localise the manufacture of drilling rigs using their top-drive technology in Kazakhstan, which will make Kazakhstan the only country in the Commonwealth of Independent States to produce rigs with this type of technology, and also a joint project with Kazgeology to implement drilling work based on an up-to-date, comprehensive geological survey.

“We’re prepared to invest several million dollars in the country from the UK, bring over experts and train local experts to get them involved. It’s a big day for us. It’s taken us about eight months to get this far,” Godwin said.

In the diversifying the economy round table, he noted Dando Drilling’s positive experience in Kazakhstan and also mentioned the importance of studying relevant legislation and having Kazakh partners, which was echoed by other participants.

Roger Holland, president of Scot Holland/CBRE, at the same round table said British companies needed to branch out farther in Kazakhstan, noting that only two British companies were active in Shymkent, despite many opportunities there. After the discussion, he said that establishing a more formal British business association would be one way of helping promote British business activity in Kazakhstan. “There are opportunities in every city all over the country, but someone’s actually got to dig around and collect that information and pass it on,” he said.

Peter Foster, president of Air Astana, itself a joint venture between Samruk Kazyna and BAE Systems, participated in the investment attractiveness round table. Afterward, he said the point that existing, successful British and joint ventures were making was that Kazakhstan was friendly to British business and that it would be a mistake for British business to ignore Kazakhstan because they didn’t know much about the country, especially considering the UK’s current economic problems. “British companies have done very well out of joint ventures in Kazakhstan,” he said. “There are plenty of people and organisations that come to this country in order to find out whether there are opportunities. It’s just a question of asking.”

Kazakhstan President Nursultan Nazarbayev and Prime Minister Cameron closed the event with a press conference, during which they noted Kazakhstan’s growing economy and potential. Cameron identified business and industrial diversification, education and the oil and gas sector as especially interesting opportunities for British business. Cameron also mentioned medical services and green technology. He also said that a new, high-level inter-government commission had been established to further encourage business cooperation.

“I have only one regret, which is that I didn’t come before and bring an even bigger business delegation,” he said.