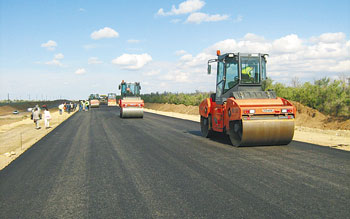 The first section of the Western Europe – Western China international highway in South Kazakhstan has been put into operation.

SOUTH KAZAKHSTAN – On July 1, the press service of the Western Europe–Western China International Transit Corridor announced that the first section of an international highway in southern Kazakhstan has been put into operation.

For nearly three years, the South Korean company Kukdong conducted construction work on the 24-kilometre road, one of the shortest sections of the route passing through south Kazakhstan. Despite a small hitch at the start of the project, construction was completed on time. Experts from Kazdorproject were responsible for quality control.

A celebratory atmosphere accompanied the placing of the last metres of concrete into the 6.5 billion tenge ($42.7 million) section of highway. Road markings, traffic signs, auto pavilions and rest areas still need to be added to the section.