This year marks 350 years since the birth of the famous hero of Kazakh history, Tole-bi, a legendary figure who left a bright mark on the fate of his people. A great star among statesmen and public figures; a philosopher, jurist and diplomat, rose on the horizon of the history of the Kazakh people three and a half centuries ago. According to historical records, he was born in summer of 1663 on the territory of the modern Zhambyl region at the Zhaisan Zhailyau, adjacent to the River Shu, near Aulie-Ata (the modern day Taraz). 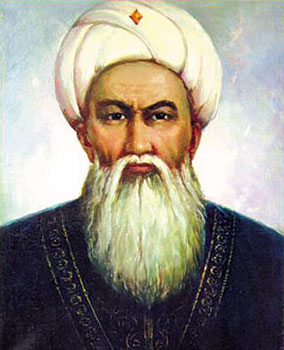 The date of his death varies in different sources. Most of them mention 1756. However, according to the well-known sinologist Clara Khafizova, in Chinese sources the date of Tole-bi’s death is 1758. He died in the Akburhan Orda area, which is located in the south Kazakhstan region, in an area which today bears his name. However, Tole-bi was buried in Tashkent, near Khan Yunus, the grandfather of the great Babur. Today, his mausoleum is called Tole-bi (but is sometimes referred to as the mausoleum of Karlygash).Tole-bi today is an example of fidelity to the path of justice and peace. It is said that he was blessed on this path by Elder Anet baba, nearly a century old at the time, who said, “It seemed to me that you were the son of the house, but it turns out that you are a son of the people. Be the rising of the dawn, the star of happiness in the fate.”

It is hard to find a person comparable to Tole-bi in Kazakh history. He played a truly historic role at the junction of two centuries filled with momentous events for the people. One period of his life was associated with the era of Khan Tauke, when peace and tranquillity reigned in Kazakh society. They say this was the time when “larks laid eggs on the backs of sheep.” Another, more significant part of Tole-bi’s life came during hard times, when the existence of over 1.5 million Kazakhs was under threat from Junggar aggression and proximity to major powers.Tole-bi’s legend has spread from Kazakhstan to its neighbours Russia, China, Mongolia, Iran, Uzbekistan and Kyrgyzstan. When on June 10, 1734, Russian Empress Anna Ioanovna sent a response to Khan Zholbarys about joining Russia, she acknowledged Tole-bi as an influential person of the Great Zhuz (an alliance of Kazakh nomadic tribes; one of three in Kazakhstan).

Historiographical reflection on Tole-bi’s personality began after Kazakhstan’s sovereignty. Soviet historiography insisted on a negative assessment of the role of biis (noble judges) and court of biis. In many ways, this attitude came from the fact that biis were members of the nobility. However, it would not be possible to imagine the full history of the Kazakh people, especially the period associated with the strengthening of Kazakh-Russian relations, without Tole-bi. Moreover, Tole-bi was a real historian of experienced events, summing up past experience and taking lessons from it.

It is no accident that Tauke Khan appointed Tole-bi to manage the Great Zhuz. His socio-legal activities fit the coherent system of the state apparatus that the Khan had built. Tole Alibekuly received the title of “father of biis” (a Turkic title meaning governor).

We should pay tribute to the far-sightedness of Tauke Khan, who knew that the principles of justice proposed by Tole-bi for creating a set of laws, Zheti Zhargy (Seven Codes), would be understood by Kazakh society. Kozhabergen-zhyrau, writing Dastan Baba Til (“The language of ancestors”), emphasised loyalty to the principles of Tole-bi in defending the homeland and the people: He was as an innovator when he introduced experiments, based on wide life experience and observation, in the court of biis.

The example of Tole-bi’s life and his legacy continue to be relevant today. Armed with deep knowledge of the traditional law of the Kazakhs and the progressive canons of Islam, Tole-bi warned against false patriotism and perverted religion.

The current generation in Kazakhstan is experiencing a renaissance of national history. We are fortunate that we are really reaping the fruits of independence, the foundation of which was laid by figures like Tole-bi. Thanks to the policy pursued by President Nursultan Nazarbayev, our society is implementing large-scale projects to revive historic memory and renew and strengthen historical consciousness. History is needed not only by a rejuvenated nation, but by future generations as well, and its stories should be complete, objective and tolerant. The task of the future is to draw the worthy lessons. That was the dream of the elder Tole-bi.

The author is a doctor of historical sciences, professor and academician at the International Information Academy.