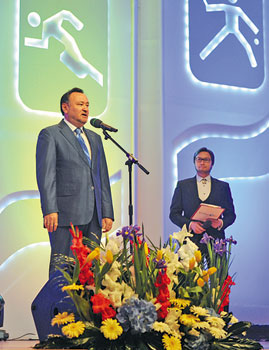 Minister of Culture and Information Mukhtar Kul-Mukhammed reported that the channel is completely ready for launch and will be broadcast by cable and satellite operators. It will be broadcast through cable operators Otau-TV, Alma-TV, Digital-TV and others, as well as online. KazSport will broadcast in two languages Kazakh and Russian for 20 hours per day and, according to the minister, will reach 65 percent of the population.

In the future, it also plans to air short documentaries.

“The preparatory work on the launch of the TV channel has been completed. Beginning July 1, it will run its first programmes,” the minister explained. “The purpose of this channel is the promotion of a healthy lifestyle and the sporting achievements of our country,” he concluded.