By Natalya Valuiskaya in Nation on 24 July 2013

ALMATY – Kazakhstan’s rare demoiselle crane is growing in population and may soon leave the list of endangered bird species known as the “Red Book.” 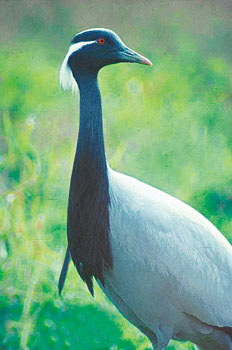 Thanks to growing population of demoiselle crane in Kazakhstan, this bird specie may leave the Red Book soon.

“This rare bird’s population is getting larger,” said Dr. Professor Anatoly Kovshar, a veteran of the Kazakh Nature Protection Society (KNPS) at this organization’s jubilee congress.

“As you know, the more we learn, the more we explore, which particularly applies to science. We thought we had made a complete description of the birds in the five-volume “Birds of Kazakhstan” book, published from 1960-1974. But now it appears that the data is incomplete, which is why the Institute of Zoology got down to work on a 30-volume edition on Kazakhstan fauna,” he told the meeting.

According to Kovshar, new bird species regularly appear in Kazakhstan, so-called vagrants from India and Pakistan. But “the demoiselle crane, previously listed in the Red Book as rare, has considerably grown in population, as well as another Red Book species, the steppe eagle. It is a good sign,” the scientist said.

For half a century, KNPS enthusiasts made every effort to involve the public in the preservation of nature, congress participants recalled.

Deputy Minister of Environment Bektas Muhamedzhanov also re-emphasized the importance of environmental issues to the state, specifically management of water resources and the transition to a green economy. The ministry has scheduled outreach work on environmental issues, and more than 30 states projects are planned. Improving the environmental situation in Almaty, as well as green planting and improving landscaping in the city are important to Almaty residents, say experts who intend to continue their environmental improvement efforts.