Whether it’s a romantic getaway or a company fishing trip, the Eight Lakes Park Resort has what one might be looking for.

The idea to create a Kazakh resort that would meet European standards was born in 2007. The Eight Lakes Park Resort is a business concept based on a gradual step-by-step development of the resort’s infrastructure. Internationally known Tilke Company, which is also a partner of Formula 1, has been involved in the resort’s development from the beginning.

The fishing club was the first attraction developed at the resort. After an artesian well was discovered on the premises, the region’s desert was turned into an oasis with sweet-smelling tamarisks, wild roses and great chinquapin trees. Artificially created ravines were filled with water from underground sources, so that eight lakes appeared. After that, 45 docks and comfortable summer houses were installed along the lakeside. The fishing club created ideal conditions for fishing and the lakes are home to a dozen kinds of fish. The lakes’ waters are clean so fishermen can eat what they catch on many of the lakes’ shores, and homes include docks to make fishing easier.

One of the most beautiful parts of the park resort is its beach club. As the designers were inspired by the Feng Shui, the general design of the beach complex is done in an Asian style representing the interaction of two elements – the water and the air. The design also includes Turkish themes and decorative elements of the Ottoman seraglios. In order to create a luxurious atmosphere, designers created brightly colored bedouin style tents and decorated pools with exclusive glass tile and unique mosaics. The total area of the beach club is 20,000 square metres which can accommodate up to 1,000 guests. Here you can find two Olympic-size, non-heated swimming pools with a depth of 1.8 metres, as well as a smaller pool for small children. The pools are equipped with modern water-purification systems. They are filled with natural water from the artesian well. Personal coaches are available for guests who would like to learn how to swim or take aqua aerobics or yoga lessons.

Visitors can rent one of 24 cozy cottages, designed in a European style and nestled among the resort’s natural areas. Each cottage is equipped with air conditioning, cable TV and wireless internet on-demand. They are also surrounded by lush greenery and nature views.

There are also two lounge bars (Sultan and Timujin), the Golden Lake restaurant with 200 seats and a summer restaurant. The resort’s menus include European, organic and Asian. Its facilities also include two banquet halls, which can accommodate up to 100 guests each. 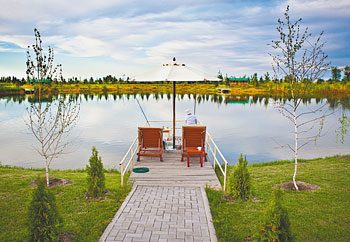 Visitors can also hike and explore the resort’s surroundings, rollerskate, bike or tour the resort in an electric car. There is also a playground area for children, a volleyball/badminton net and a basketball hoop located within the beach club.

The resort also provides entertainment, such as fashion shows, live music concerts, laser shows on the lakes and a safari tour highlighting the region’s wildlife.

The philosophy of the park is based on a respect for the environment. The maintenance of eco-friendly practices is a distinctive feature of the Eight Lakes Park Resort. One of the main goals of the resort is to limit its environmental impact and preserve the region’s natural beauty. The resort is far enough away from major cities that its air is clean and the resort is quiet. To preserve that peaceful atmosphere, the resort has banned all vehicles except eco-friendly cars.

So whether it’s a romantic getaway or a company fishing trip, the Eight Lakes Park Resort has what one might be looking for.