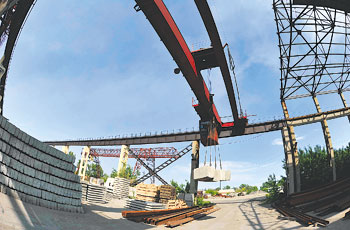 According to producers, the “lying-glass” method not only reduces work time but also the cost per square metre.

PAVLODAR – A new house-building plant with technology unequalled in the rest of the country was recently officially put into operation in the regional centre of Pavlodar.

The new plant of Vita-Dorstroy company manufactures block-sections for the construction of high-rise buildings. The regional administration intends to sign a memorandum with the enterprise on joint activities and construction of a new district of the city Sary-Arka, with 10-16 story buildings in individual projects. There will be about 5,000 apartments in this residential area. Construction of similar residential buildings is also planned in other districts of the oblast centre.

“This was one of the most progressive technologies in the Soviet period,” Executive Director of Vita-Dorstroy Vyacheslav Chekannikov said. “As far as I know, today only one region of Russia has returned to this technology. We modernised it and started to work.”

“The main advantage of this technology is the degree of prefabrication of the building product – a block section. It is produced by the so-called ‘lying glass’ method, in which three walls, the floor and the ceiling are cast in a form. Electric wiring is already placed in this structure, and mounting holes for all plumbing devices are incorporated. Then the builders install plastic windows, door frames and hang wallpaper in the rooms. As long as we also produce moulded tubs, toilets, elevator shafts and stairways, we can form houses of any configuration and number of floors from our cubes. Taking into account the cold winters in the region, the buildings are protected with heat-insulated panels,” he commented.

According to Chekannikov, this building method not only reduces work time (one floor can be mounted in a day and a nine-story house in six weeks), but also the cost per square metre.

In addition, production is improved considerably due to the absence of rubbish and debris on the construction site. Moreover, Vita-Dorstroy practices construction as a closed loop. The partnership itself produces its concrete mix, reinforcing mesh and fixings and delivers block-sections to the construction site on car platforms. Workers then assemble the body of the building, completing the construction chain.