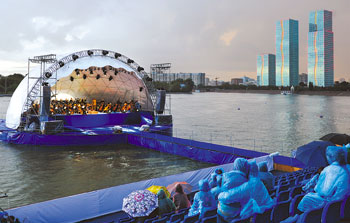 Despite bad weather conditions, residents and guests of the capital came to the Yessil River bank to enjoy the classical music.

ASTANA – As they have been for the past five years, “River of Sound” evenings of classical music were once again held along the embankment of the Yessil River as part of Astana’s Capital Day celebrations. The concerts were held this year on July 5 and 6.

Pontoon stages held concerts of symphonic music as well as masterpieces of opera and ballet. In this jubilee year for Astana, the concerts’ programmes were especially beautiful and original. In the white, shell-like stages on the riverbank, fragments of musical masterpieces by Brahms, Berlioz, Strauss, Rossini, Offenbach, Ravel, Saint-Saens, Tchaikovsky, Dzhadzotto and others were given a romantic setting. World-famous conductor Christian Sandu dedicated the second evening to the 200th anniversary of Giuseppe Verdi, whose beloved opera, “La Traviata,” sounded over the water for the first time. The leading roles of Alfred and Violetta were performed by specially invited guests and winners of international competitions Marius Vlad (tenor) and Irina Iordochesku (soprano). A jazz concert drew the River of Sound to a close. Due to the unusually rainy July weather, the organisers considered cancelling the concerts, but the musicians refused and the concerts were held despite some periods of rain.