By Natalia Valuiskaya in Culture on 24 July 2013 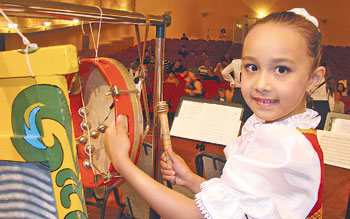 Malika Abdullina, one of the youngest performers, prefers playing tambourine.

ALMATY – The Russian, Slavic and Cossack cultural associations of Kazakhstan organised concerts by children in Almaty on July 19.

“Cultural diversity and the singularity of each ethnic group show that the people of Kazakhstan are one nation,” First Deputy Chairman of the Slavic Association Anatoly Chesnokov said. “Cultural and social stability should be a mainstay for every family; they are the signs of nationhood. We, Slavs, keeping our ethnic culture, stand for national unity and inter-ethnic harmony in the country,” he continued.

Chesnokov said that the recent meeting of young leaders of ethno-cultural associations brought up the prevention of extremism, terrorism and radicalism, including religious radicalism as part of their sociopolitical work. But cultural events like concerts are the best evidence of Kazakhstan’s social stability and commitment to it, he said. The young leaders at the rally pledged to oppose any kind of extremism.

Malika Abdullina, one of the participants in the concert, is a well-known personality in Almaty. Abdullina is a first grader at Almaty upper secondary school No. 22, and plays three instruments in the orchestra: tambourine, triangle and washboard. Tambourine is what appeals most to her most.