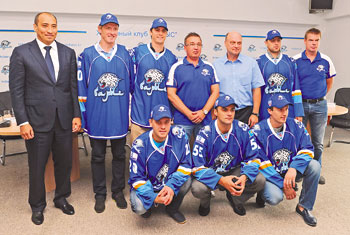 ASTANA – New Barys goalkeepers Ari Ahonen and Dmitry Malgin and defenders Yevgeni Blokhin, Vladislav Kolesnikov, Maxim Semenov and Mike Lundin were introduced along with other new players at a press conference after the club’s recent practice.

According to club president Nurlan Orazbayev, “Barys should make it through the first round of playoffs. In addition to this tournament, special attention will be paid to the Nomad club, which plays in the Kazakhstan championship, and the Snow Leopard youth team, which plays in the International Youth Hockey League.”

New coach of the club and coach of Kazakhstan’s national team, Finnish specialist Ari-Pekka Selin, discussed plans for the coming season. Barys will have its first friendly match on July 31 against SKA St. Petersburg. On August 3-4, they will play the Swiss Davos, and, before that, on July 24 the team will leave for Europe for training.

New goalkeeper Ahonen from Finland says he’s eager for the season to start and not afraid of the competition.

“Vitaly Yeremeyev is a very experienced goalkeeper and to compete with him for the place on the team was a challenge for me as a professional athlete. Having got an invitation from the club, I hesitated for a long time. Barys has earned a good reputation, and its results speak for themselves. Also, I knew that Ari-Pekka Selin was the team’s coach. I am looking forward to the new season enthusiastically,” the Finnish player said