ASTANA – Honorary ATOM Project Ambassador and artist Karipbek Kuyukov, a victim of Soviet nuclear testing at the Semipalatinsk nuclear test site who was born without arms and who paints with his feet and mouth, was named on June 28 one of the 100 most influential people in armed violence reduction by the British organization Action on Armed Violence (AOAV). 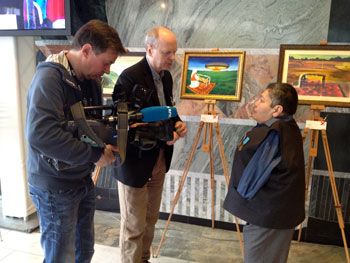 AOAV works locally, nationally and globally to reduce – and prevent – armed violence. Kuyukov joins such prominent figures on the list as UN Secretary General Ban Ki-moon and Nobel Prize laureates Kofi Annan and Dalai Lama. Kuyukov is listed as a survivor of the nuclear weapons testing that took the lives or severely damaged the health of 1.5 million people near the Semipalatinsk nuclear test site during the four decades of its operation by the Soviet Union from 1949 through 1991.

“I felt very proud to find out that I had been included on that list,” Kuyukov, who turns 45 on July 18 and who lives in Karaganda, said after hearing the news. “But this achievement is not only my achievement. All my colleagues played a vital role in this, starting from the Nevada-Semipalatinsk movement and also all those victims of the Semipalatinsk nuclear test site whose pain and suffering I have carried throughout all these years. Now, I continue my mission as the Honorary ATOM Project Ambassador as part of the new wave in this struggle for a world free of nuclear weapons.”

“This is another confirmation that Kazakhstan and our President Nursultan Nazarbayev, after having shut down the Semipalatinsk nuclear test site, now continue to play a leading role in the world in the area of non-proliferation, including through the international movement called The ATOM Project,” Kuyukov added.

“Nuclear weapons do not distinguish between nationalities, races or skin colour. Therefore, this recognition that I just received is a huge leap forward not only for the nuclear tests victims in Kazakhstan, but all over the world, for the victims in Nevada or Hiroshima, and all those that didn’t live to see this day. This recognition was sort of an acceptance by the people in the world that we must stop this nuclear madness. I hope that the new generation pays considerable attention to this issue and uses this experience to avoid such mistakes in the future and that we will have nuclear weapon free skies,” Kuyukov said. 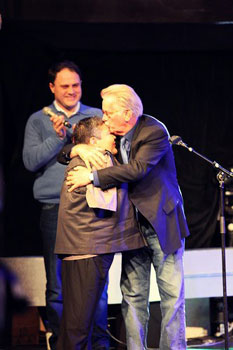 Kuyukov has dedicated more than twenty years of his life to opposing nuclear weapons internationally for, as he puts it, the simple reason of ensuring the world doesn’t see other victims like him born in the future. He is a true fighter who has fought the bitter reality he has faced throughout his entire life – he was born without arms.

“Actually, since I was born without arms, I got lucky, in terms of never knowing what it would feel like to lose them. From the very first day, I had to get used to doing everything without arms – eat, cook, paint, write, everything. It is much harder to lose arms because then your whole life would turn upside down,” he said.

Karipbek Kuyukov has already inspired thousands of Kazakhs and people in other countries through his art and public speaking. Perhaps, as he says, he got “lucky” that he was born without arms, didn’t have to learn to live without the arms he once had, and was able to create his own reality where he feels comfortable. However, it is inconceivable for a person with both arms to understand what that could be like. The best proof of that would be to watch him paint. What would normally take about 30 seconds for a person with both hands to paint, usually takes Kuyukov up to two minutes to paint with his feet and mouth.

Despite all these challenges and ongoing related health issues that make travel difficult, Karipbek Kuyukov continues to travel the globe exhibiting his works in an effort to help bring about a world free from nuclear weapons. In the early 1990s in his early 20s, Kuyukov started his fight as part of the Nevada-Semipalatinsk anti-nuclear movement. At that time, within the frames of the movement, he has traveled to the Nevada tests site, met with other victims of nuclear tests and visited Hiroshima and Nagasaki.

Karipbek Kuyukov believes his dream and that of many millions of people for a world free of nuclear weapons will come true only when each individual understands what the consequences would be if one more nuclear bomb were dropped on any city anywhere in the world. And those consequences would be much worse today than what occurred half a century ago in Japan because the power of one atomic bomb has grown many times during an arms race that has lasted since the 1940s.

When a Prime Minister Apologizes

It was in relation to one of Karipbek’s numerous trips in 2013, when the artist and activist drew global attention and even received an apology from British Prime Minister David Cameron during Cameron’s first visit to Kazakhstan in early July. The apology was the result of Karipbek being not issued a British visa to enter Scotland earlier in the year for a nuclear conference in Edinburgh. Karipbek was not given a visa, according to a letter from British officials, because his “biometrics were of poor quality.” In other words, the armless artist was not issued a visa because he did not provide fingerprints with his visa application. British officials ultimately apologized, explaining that this situation was the result of a “breakdown in communications” between their visa office in Almaty and the visa issuing post in Istanbul, Turkey. Kuyukov accepted their apology without anger or hesitation. But the incident made international news when it was picked up by news outlets, such as the BBC and Huffington Post.

And on July 1, at a joint press conference with President Nursultan Nazarbayev, David Cameron was asked to comment on this weird situation as part of a broader question about a rather complicated visa issuing arrangement the British have set up for citizens of Kazakhstan.

“As for the disabled artist, this incident was very wrong, we are sorry. Of course, that should never have happened and we discussed it with the President. We have to see what else we can do (to simplify the visa regime). I can see that we can make it faster and better but, but we still need to retain proper processes and procedures,” Cameron said

“I am happy that David Cameron addressed this issue,” Kuyukov said when hearing the news. “I am sure it was just a human factor, a misunderstanding. I hope that this situation would shed light on the visa regime with the UK. I didn’t worry about it too much, it is too sad that we couldn’t present our ATOM Project in Scotland and that is the only thing I regret about. Despite this misunderstanding, we have over 70 000 signatures under the ATOM Project’s online petititon, but probably this trip could have helped us get much more signatures.” 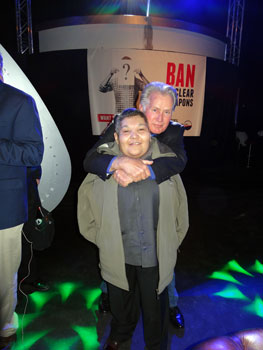 The ATOM Project was launched by President Nursultan Nazarbayev on Aug. 29, 2012, the 63rd anniversary of the first Soviet nuclear test at Semipalatinsk and the 21st anniversary of his closure of the infamous test site in eastern Kazakhstan. The project’s goal is to galvanize global public opinion to urge all countries and especially those that own nuclear arsenals to ensure the early entry into force of the Comprehensive Nuclear Test Ban Treaty and to put an end to the nuclear arms race.

The perpetual question of whether it is better to eliminate nuclear weapons or retain them in order to intimidate neighbors has been answered by the example of Kazakhstan, the Kazakh president has said. In the 1990s, Kazakhstan gave up what was then the world’s fourth largest arsenal, which it inherited from the Soviet Union in 1991. By giving up its nuclear weapons, President Nazarbayev announced that Kazakhstan would seek security through peaceful cooperation with other countries, rather than the world’s most powerful weapons. More than 20 years later, Kazakhstan continues to benefit from that decision with the attraction of significant foreign investment and some of the world’s fasatest economic growth rates, and it is never shy to urge other countries with nuclear weapons ambitions, such as most recently North Korea, to abandon them.

The acronym ATOM stands for “Abolish Testing. Our Mission.” Under the project, anyone can go to www.theATOMproject.org and sign an online petition to urge global leaders to put a permanent stop to nuclear tests and ultimately rid the world of nuclear weapons.

As part of the ATOM Project, Karipbek Kuyukov has travelled and exhibited his works at the Organization for the Prohibition of Chemical Weapons in The Hague, at the UN in Geneva and in Washington, DC, in 2012. Earlier in 2013, Karipbek Kuyukov addressed the representatives of 132 countries who participated in the international conference on humanitarian consequences of nuclear weapons in Oslo. The ATOM Project and Karipbek Kuyukov are currently preparing to promote the initiatives with new exhibitions in the U.S. and Western Europe, including at the Comprehensive Nuclear Test Ban Treaty Organization in Vienna in the second half of 2013.

The exhibition of Kuyukov’s paintings, “I Only Have My Heart to Hold You,” has been praised by politicians, diplomats and non-proliferation activists from around the world.

“We have big plans with the ATOM Project this year, but most of all we hope that after our trips as many people as possible sign our petition. We will do our best to tell the story of Kazakhstan and get other world leaders to think about the future of their own children. I hope to meet with more organizations and NGOs and to convince them to join our efforts to make our fight against nuclear arms even stronger,” he said.