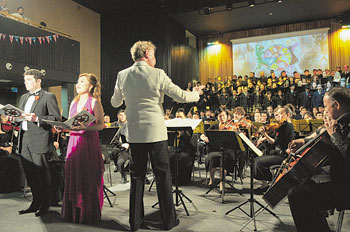 Everyone is welcome to join the Astana’s Haileybury School Community Choir and sing for fun.

Andrew, can you please outline for our readers whose idea the choir was and why it was formed?

Wherever I have worked as a director of music or headmaster, I have been very fortunate to have found adults who would like to make music, sometimes with pupils of the various schools, and sometimes as a separate adult community choir. In Haileybury Almaty, I formed a community choir, which gave many concerts, concluding with a tour to London in December 2010. In November 2011, I founded the Haileybury Astana Community Choir.

What does your involvement with the choir personally mean for you?

To make music with staff, parents and friends of the school has always been an enriching experience for me. I have been fortunate to meet some wonderful people through making music and have performed in some special places, such as in London, Edinburgh, Dublin, Paris, Rome, Venice, Florence, Berlin, Prague and now Almaty and Astana.

How is the choir’s repertoire usually chosen?

In Kazakhstan, except for CarminaBurana, I have deliberately chosen to rehearse and perform music by living English composers John Rutter and Bob Chilcott, both based in Cambridge, which I hoped would attract Kazakh people to join the choir.

Who can participate in the choir?

Everyone is most welcome to join the choir and sing for fun!

Andrew, it is known that you will be going back to your country soon. Who is going to look after the choir?

Two outstanding musicians and members of the staff at Haileybury Astana, Ross Clarke and Adam Csenki, will keep the choir rehearsing and they will oversee a performance September 9th at 7 p.m. at the school.

Please tell us about the CarminaBurana concert? How many people participated?

Over 200 people took part in the performance. There were 90 children from the school aged 9 to 12 years of age, the school’s Community Choir of 35 voices, the Astana Philharmonic Choir of 30 voices, and a string section who together with the Astana Wind & Brass Symphonic Orchestra formed the Orchestra of 45 players, plus 3 soloists – a soprano, a countertenor and the baritone.

CarminaBurana takes its name from the “Song of Beuron.” In the late 13th century, a monk in the Benedictine monastery of Beuron in Bavaria had made an anthology of about two hundred contemporary poems written by the goliards, who were often wandering scholars or vagrant monks. When the monastery dissolved, this previously undiscovered book found its way to Munich. The poems touch every sphere of human activity – church, state, society and the individual. There are lyrics too, about spring and love and dance songs, which celebrate all the sensual joys. The poems are written in Latin, French and Old German. CarminaBurana was first performed in Frankfurt in 1937. And it is through concert performances that the work is generally known.

Gareth Stamp, who works at Nazarbayev Intellectual School, also gave The Astana Times his impressions of the June 15 concert.

Said Stamp: “It was the third concert that I have been involved in with the choir. They have had four all together in Astana. Each one is slightly different, each one is more challenging. And this is probably the most challenging music that we have performed. There were so many parts to it. We worked very hard as a choir to bring it all together. It was very nice to work with lots of local people from the Astana choir from the orchestra and we became very good friends as well. It is a social event when we do meet in the choir. At the same time, we take it seriously. CarminaBurana was actually very emotional, rousing music, with lots of emotions. It was very appropriate that it was the last concert under Andrew’s leadership as I feel we made him proud and gave the audience a memorable evening.

We are already looking forward to our next choir sessions. Ross and Adam will bring a different flavour to the music and I am confident that we can maintain the high standards that Andrew has set. We always welcome new people and would be very happy to see some new participants in September when we start again. The rehearsals are good fun and the social side to the choir has certainly introduced me to some very good new friends – come along and have fun.”