By Ilyas Omarov in National Overview on 10 July 2013 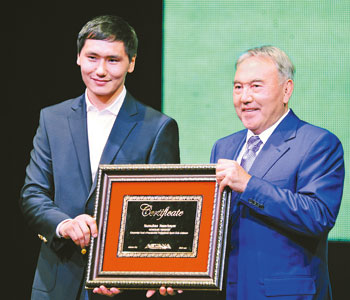 President of the new “Astana” presidential multi-sport club Bakhtiyar Artayev handed a certificate of its honorary president to Nursultan Nazarbayev.

On the eve of the Capital Day of the, the new “Astana” presidential multi-sport club was launched. Stars of world sport Luis Figo, Oliver Kahn and Alexander Ovechkin came to congratulate the people of Kazakhstan on this great occasion.

The “Astana” Presidential Club combines the best Kazakhstan sports teams. Professional cycling team “Pro Team Astana,” the same name basketball and football clubs, hockey team “Barys,” “Astana Dakar Team,” boxers from “Astana Arlans,” the team of water and horse polo, as well as the project for development of the national wrestling “Kazakhstan Barysy” are among them. Two-time Olympic weightlifting champion Ilya Ilyin and world championship medalist in figure skating Denis Ten will also be training under the banner of the new club. 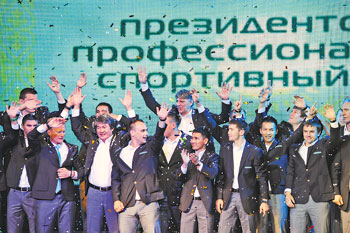 President Nursultan Nazarbayev was awarded the title of honorary president of the “Astana” club. Olympic boxing champion Bakhtiyar Artayev handed the certificate to the President.

The head of state noted the new multi-sport club was not named after the capital of Kazakhstan by accident.

“Astana is a light tower of Kazakhstan’s development,” Nazarbayev said. “Our country has achieved significant results not only in the economy but in the sports as well. Seven gold medals and the 12th team place at the Olympic Games in London testify to that. Kazakhstan has to become a world class sports power. We have got a constellation of brilliant athletes who have glorified our country with their victories. But we do not intend to stop; we need to enter a highly professional level of sports management. Kazakhstan should be known as the nation of winners. After the Universiade in Almaty [in 2017], we want to bid for the Winter Olympics in the southern capital [in 2022]. All conditions have been created for this already, and there is hope for support from the international sports community.”