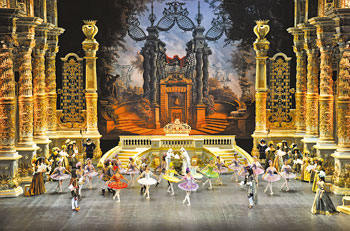 The latest incarnation of the Sleeping Beauty classic ballet by Petr Tchaikovsky premiered at the Astana Opera and Ballet Theater on July 3 during the celebrations of the Capital Day.

This latest incarnation of the classic ballet was choreographed by renowned master choreographer Yuri Grigorovich. Its artistic director was world famous Ezio Frigerio with costumes designed by Oscar-winner Frank Skuarchapino. All of these professionals were invited to the Astana premiere, which was also attended by Kazakhstan President Nursultan Nazarbayev.

Grigorovich’s and Frigerio’s version of the ballet demonstrated the potential of the huge stage of the new theatre.

The new version of Sleeping Beauty is being performed in five theaters around the world, including the Astana Opera House. The other theaters include the Metropolitan Opera in New York City, the Royal Opera House in London’s Covent Garden, the Warsaw National Opera House and the Bolshoy Theatre in Moscow.

The ballet was based on the choreography of Marius Petipa, but Grigorovich presented an updated version in which good triumphs over evil. Its staging synthesizes fairy-tale motifs and love poetry. And the great music of Tchaikovsky underscores all the facets of the story. 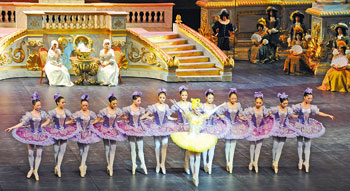 The ballet was choreographed by renowned master choreographer Yuri Grigorovich and its artistic director was world famous Ezio Frigerio.

The creation of the original Sleeping Beauty ballet is credited to the late director of the Imperial Theatre Ivan Vsevolozhsky. He wanted to create a performance similar to a French court balletwith parades, sideshow and of a huge scale. The basis of the libretto tells the tale by Charles Perrault, “Sleeping Beauty of the Forest.”

For the costume designers, the ballet posed a challenge because it was necessary to develop costumes for the two eras: the bulky and heavy clothing of the 17th century and the light suits of silk from the 18th century. All dresses for this production were embroidered by hand and most weremade in the workshops of Milan, Moscow and partly in Kazakhstan.

Elaborate staging materials weighing 16 tons were delivered to Astana from Italy in 14 large shipping containers and were installed by dozens of workers using intricate winches. The gate to the ballet’s royal castle alone weighs 500 kg (1,102 pounds). 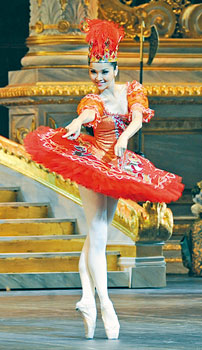 “I have to tell you that I am amazed at the theater. It is like a city that emerged, like a mirage in the desert. A few years ago, it was a totally different city. But it grows continuously. It is amazing and beautiful,” Grigorovich said of the Astana Opera House and the city.

“This is a very complicated show and we have been working hard. I have had a wonderful experience. The young people who take part in the show are very talented. The technique is very complicated,” said Grigorovich.

“I’d like to talk about the difference between theSleeping Beauty, which was staged at the Bolshoy Theatre and the one that will take place tomorrow in Astana,” Frigerio said before the premiere. “This art work is undergoing growth and development. Every time we have worked on this project over the years, we have brought something new. Naturally, this ballet will be similar to the ballet staged in Moscow and Warsaw. Nevertheless, this ballet in the Astana Opera is more developed and has a completely different look. If we consider all elements of ballet’s detail, they are different from each other. But the basic setting is the same.”

“Beauty has no price. I would like to thank everyone for this performance, for such beauty that we have presented,” Astana Opera Director Tolegen Muhamedzhanov said.