By Michelle Witte in International on 10 July 2013

Finnish Ambassador Mikko Kinnunen may be wrapping up his mission in Kazakhstan on July 12, but Finland and Finnish business are here to stay. 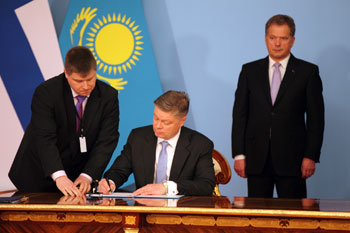 It’s been an eventful four years for the ambassador: two embassies have been established; state visits have been conducted, most recently the visit of Finland’s President Sauli Niinistö this past April; and multiple ministerial and parliamentary visits have taken place, including a flurry of activity this past March when three ministerial visits happened in a period of two weeks. “Probably a world record in Finnish-Kazakh relations,” the ambassador joked during a recent interview with The Astana Times.

“Now, we are really widening into new and quite challenging and interesting areas,” Kinnunen continued. Bilateral cooperation in education and the green economy have been much in the news recently – there was a Finnish education delegation in Kazakhstan in mid-June – and the ambassador cited programmes to provide scholarships for Kazakh Ph.D students in environmental issues to study in Finland and work on setting standards for professional vocational schools in Kazakhstan. There is also a train-the-trainers programme to improve the training of nurses.

Healthcare is another area in which the countries are cooperating. In addition to the nursing training programme, the two countries are working on projects to create modern laboratories with quality control procedures and cooperating in the area of preventative medicine. Kazakhstan’s and Finland’s geographical similarities make distance health care an important area of collaboration, especially on diagnosing problems at home and determining whether a hospital trip is needed. “We are both very sparsely populated, and this is another factor in healthcare, in education: how do you provide equal services to every citizen in every different part of the country? This is one thing that we have in common and I think we are facing similar issues,” Kinnunen said.

Finland’s projects in Kazakhstan, he stresses, are long-term. “There are no quick gains or quick wins. Education, innovation, green technologies, they are not products. In a way, it’s easy to sell a cup or a telephone or a piece of a car, but if you sell systems that also have cultural aspects to them, that’s not such a straightforward, easy thing. And we don’t have any quick gains in mind here – we’re not in the oil business in Kazakhstan.” Instead, education, environmental protection, healthcare and even travel, the desires of a population with increasing wealth and standards of living, are the fields in which Finland and Finnish business aim to contribute.

“The main reason for our existence here is trade and the economy,” the ambassador said. Kazakhstan is a rising economic power, he stresses, better performing in many ways than the BRICS countries. However, a rapidly growing economy in the midst of neighbours who are seeing less growth, if any, can be problematic. Finland has been in the same position with its neighbour Russia, whose economy struggled in the 1990s, and with the Baltic states shortly after their independence. 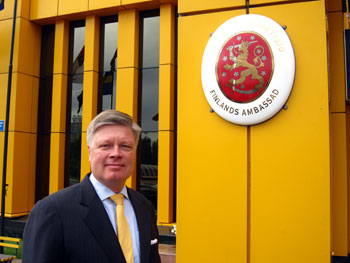 “In the Nordic countries, we have a long, positive history of regional cooperation,” the ambassador said. In fact, the Finnish embassy in Astana shares one large office space with the embassies of Norway and Sweden. “When the Soviet Union collapsed and the Baltic countries again became independent, -Nordic-Baltic cooperation played a big role in helping Estonia, Latvia and Lithuania. Increasingly, Kazakhstan is interested in promoting regional cooperation in Central Asia and here is an interesting connection that hopefully can also be practical in terms of politics.

“Apart from the economy, politically, in foreign policy, Kazakhstan is growing… If you look at Kazakhstan’s foreign policy, in the CIS region, after Russia, Kazakhstan is the second most active country,” the ambassador said, calling his host country also a buffer of stability in the region. The past few years have seen some political milestones. “When Kazakhstan was chairing the OSCE (the Organisation for Security and Cooperation in Europe), during the historic summit here in December 2010, I think we learned a lot from each other, the OSCE countries, through that chairmanship, when we were speaking of issues like democracy and media rights. These things are processes, and it’s very good that they were very open and put out on the table during that chairmanship.”

The parliaments of the two countries are also increasingly in contact, and the ambassador reports that the speaker of the Finnish parliament will be visiting Kazakhstan in the first half of 2014.

“If you read Strategy Kazakhstan 2050, you find that the aim is to strengthen democracy and increase parliamentarianism,” Ambassador Kinnunen noted. He predicts more parliamentary cooperation in the future if Kazakhstan follows the aims in that strategy.

“I’ve spent four years here and I don’t know how the time has gone so fast,” Ambassador Kinnunen told The Astana Times. He’s covered most of the country – Kazakhstan has “a lot of realities,” he notes. He’s developed a taste for shubat (fermented camel’s milk) and beshbarmak and horse steak, and his daughter, who attended a local kindergarten, now corrects his Russian pronunciation. The professional experience of starting an embassy from scratch, though an immense amount of work, he calls an honour and a major achievement.Astana remains the ambassador’s favourite city in the country. “I like the speed with which it’s growing,” he says, looking out the embassy window over the expanding city. “I think Kazakhstan wishes to emphasise that when a country is 20 years old, the state-building has been finished, but I think state-building might to some extent still continue. And at the same time the physical infrastructure building continues. So there are these two parallel processes of building going on and there is something fascinating about this growth.”

“If you want to do anything a little bit bigger,” he says, “you have to be present here. You can’t do business remotely from Finland, you really have to be here. You have to drink tea with people every day and talk with them. Eventually, if you want to be serious, in one way or another, you have to be represented here.”

Ambassador Kinnunen will be followed by incoming Ambassador Ilkka Räisänen. Räisänen is currently head of the Minsk Liaison Office of the Embassy of Finland and has worked as a counsellor at Finland’s embassy in Washington, DC and as a diplomatic exchange for the European Neighbourhood and Parnership Instrument in Estonia. The ambassador who set the embassy up is leaving, but the presence remains, a sign of an expanding relationship.