The May 26 Giro d’Italia victory of Astana Cycling Team Captain Vincenzo Nibali made big news in Italy, Kazakhstan and the cycling world. Following the race, Nibali, also known as Shark, visited the Kazakhstan capital, where he sat down for an interview with The Astana Times. 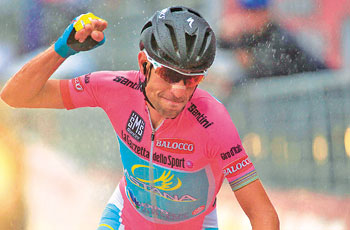 The winner of the 2013 Giro d'Italia Vincenzo Nibali brought glory to Astana Team.

Have you been to Astana before?

Yes, this is my second visit to Astana. The first time I came here was in December of last year for the presentation of our team.

You have raced in elite races around the world. Do you think it’s possible to hold a professional cycling tour in Kazakhstan?

Yes, Kazakhstan in this respect has a lot of prospects. As far as I know, Almaty will host a test event this fall in October, in which famous cyclists will take part. It will be kind of a test drive, after which it will be possible to explore the possibilities of your country in this direction.

Before joining Astana Cycling Team, you spent seven seasons with Liquigas. And now you have extended your contract with Astana until 2016. Do you like frequent changes?

From the first day I arrived in Kazakhstan, I felt as if I was in a family. I realized that this is my team, and eventually I decided to extend the contract until 2016 with the Astana team. It is very important for me to stay with Astana and compete for it. I will do everything I can.

Victory in the Giro d’Italia was not easy, particularly given the extreme weather conditions. But you maintained your composure. How did you manage to do that?

Giro d’Italia is a serious cycling race. Yes, the weather conditions were severe. I wished the weather was better, but we were a little bit unlucky, it was snowing. All days long we were building our victory, we believed in it. We did not have special preparations, but all members of the team trust each other. In the end, we won.

Who do you think is the main contender to win in the Vuelta?

It is difficult to say now or to make any predictions. I will repeat once again that race victories are painstakingly achieved and built day by day. Take, for example, Giro d’Italia. It was a difficult and exhausting test. As for the Vuelta, let’s see what will happen.

It has been reported that you will not take part in this year’s Tour de France. What are your plans for next year?

Yes, this year I will not take part in Tour de France because I want to focus on the Vuelta and the road cycling world championship, which will take place in September in my native Italy. I plan to partake in the Tour de France next year.

Some consider the Astana professional cycling team to be one of the most successful public image projects of Kazakhstan internationally. Would you agree with that?

You were recently married. How do you manage having to be away for multi-day races? 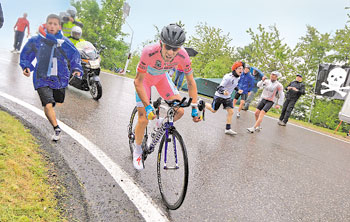 Vincenzo Nibali and his team mates had to endure tough weather to win in Giro d’Italia.

Yes, indeed, I got married last fall. My wife is now at home in Italy. Of course, the separation is hard for her, but she understands my work. I travel all over the world and she supports me.

As a true Italian, surely you love wine. And what kind, other than Vino (nickname of famous Kazakhstan cyclist Alexander Vinokourov), of course, do you prefer?

(Smiling and pointing in the direction of Alexander Vinokourov). Yes, I know Vino as a good racer, but now recognize him as the general manager of the Astana team. As for wine as a drink, then, as a rule, I only taste it. As you know, in Italy there are many varieties of wine. Personally, I prefer red wine from the famous Sicilian varieties of red grapes Nero d’Avola.

Why do they call you “Shark” and “Cannibal.” How do you feel about that and what do those names mean?

“Shark” is an old nickname and my fans do really call me that. “Cannibal” is also a nickname that exists. I do not know why they call me that. For me, it does not mean anything special.

Italy is well known as a producer of quality films. Which movies do you like?

This is a very difficult question. The fact is that my mother worked in video sales, so I’ve always had the opportunity to see the latest movies. So again, I cannot definitively answer this question. There are a lot of movies that I like.

It has also been reported that you are a serious photographer. Have you held exhibitions where the public can see your work?

Yes, I have a passion for photography. But the last few years, I haven’t been able to do it. I just do not have enough time. Now I only take pictures on the weekends. For example, recently, when I was at the zoo, I photographed animals: elephants, leopards.

According to some, Italy is home to great musicians. I will not be forgiven if I do not ask about your musical tastes?

In addition to Italian music, I love the music of the legendary band Queen.

On this tour in Kazakhstan, instead of the usual workout gear for a cyclist, you will spend most of your time in stylish business clothes. Which Italian couturier do you prefer?

Oh no, in this matter, I have no boundaries. I wear suits, shirts and shoes, which are above all, comfortable. This is my main condition. I prefer brands such as Giorgio Armani, Dolce & Gabbana and Hugo Boss that I combine and mix together.

Have you had a chance to try Kazakhstan’s national cuisine during this trip?

We visited several national restaurants. I tried horse meat and I liked it, very tasty.