ASTANA – The Dutch Embassy in Kazakhstan and the Nazarbayev Center jointly organised an exhibition of reproductions of paintings by Vincent van Gogh, the world-famous Dutch post-Impressionist painter, to be open for the public from June 10 through July 7. 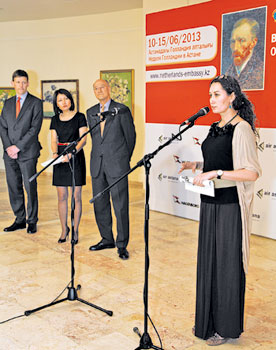 Leila Makhat along with Dutch Ambassador Peter van Leeuwen and others open the exhibition on June 10.

The exhibition features 44 reproductions of paintings, landscapes and portraits, which also included “Cypresses,” “The Potato Eaters,” “The Yellow House” and others. The exhibition, became a real chance to assess the beauty of famous “Sunflowers” and other well-known pictures.

The event is part of the Second Dutch Week in Astana, taking place from June 10 to June 15.

The pictures of van Gogh are showcased in museums around the world, and it became impossible to bring 40 unique works of the great painter due to technical and financial limitations.

Leila Makhat, deputy director of the Nazarbayev Center, opened the exhibition expressing gratitude to the organizers and sponsors of the event.

“This is a big event – the Days of Holland in Kazakhstan and a result of joint activity of two countries. The fact that we hold days of culture of our counties, get acquainted with the traditions and heritage of the people confirms our strong friendship,” Peter van Leeuwen, the Dutch Ambassador in Astana, underlined in his welcoming remarks. “Today’s exhibition of works of Vincent van Gogh is the start of the week. I also invite you to attend other events within the week of Holland, which include concerts, Dutch movie festival, workshops and various lectures.”

“This is a noteworthy fact that the citizens of our country start to understand, value and love art because this is the cultural side of any person. It means a lot for self-development and development of taste,” Svetlana Tskhai, a visitor to the exhibition, shared her views on the occasion.

The exhibition launch became a start to the Dutch Week in Astana. In addition to the exhibition of reproductions, on June 11, Leila Makhat, who is also a famous artist, gave a lecture titled “Life and Art of van Gogh”.

Vincent van Gogh is one of the greatest and most recognizable painters in history. His work has had a significant influence on subsequent generations of artists. Along with the creations of Pablo Picasso, the masterpieces of Van Gogh are among the first in the list of the most expensive paintings ever sold in the world, according to assessments from auctions and private sales.

Today, about 1,700 of his works, nearly 900 drawings and 800 picturesque paintings are preserved.

Vincent van Gogh, for whom colour was the chief symbol of expression, was born in Groot-Zundert, Holland on March 30, 1853.

The son of a pastor, brought up in a religious and cultured atmosphere, van Gogh was highly emotional and lacked self-confidence. Between 1860 and 1880, when he finally decided to become an artist, van Gogh had had two unsuitable and unhappy romances and had worked unsuccessfully as a clerk in a bookstore, an art salesman, and a preacher in the Borinage (a dreary mining district in Belgium), where he was dismissed for overzealousness.

He remained in Belgium to study art, determined to give happiness by creating beauty. The works of his early Dutch period are somber-toned, sharply lit, genre paintings of which the most famous is “The Potato Eaters” (1885). That year, van Gogh went to Antwerp where he discovered the works of Rubens and purchased many Japanese prints.

In 1886, he went to Paris. In Paris, Van Gogh studied with Cormon, inevitably met Pissarro, Monet, and Gauguin, and began to lighten his very dark palette and to paint in the short brushstrokes of the Impressionists. His nervous temperament made him a difficult companion and nightlong discussions combined with painting all day undermined his health. He decided to go south to Arles where he hoped his friends would join him and help found a school of art. Gauguin did join him but with disastrous results. Near the end of 1888, an incident led Gauguin to ultimately leave Arles. Van Gogh pursued him with an open razor, was stopped by Gauguin, but ended up cutting a portion of his own ear lobe off. Van Gogh then began to alternate between fits of madness and lucidity and was sent to the asylum in Saint-Remy for treatment.

In May 1890, he seemed much better and went to live in Auvers-sur-Oise under the watchful eye of Dr. Gachet. Two months later he died, having shot himself “for the good of all.” Van Gogh’s finest works were produced in less than three years in a technique that grew more and more impassioned in brushstroke, in symbolic and intense colour, in surface tension, and in the movement and vibration of form and line. Van Gogh’s inimitable fusion of form and content is powerful, dramatic, lyrically rhythmic, imaginative, and emotional, for the artist was completely absorbed in the effort to explain either his struggle against madness or his comprehension of the spiritual essence of man and nature.

The Van Gogh Museum first opened its doors in 1973. The museum contains the largest collection of paintings by Vincent van Gogh in the world, his letters and documents.