URALSK – This western Kazakhstan city saw a large-scale celebration of the National Sabantuy, in which President of Russia’s Republic of Tatarstan Rustam Minnikhanov, representatives from different regions of Kazakhstan and the Saratov, Orenburg, Samara and Chelyabinsk regions of the Russian Federation took part. The event was held under the auspices of the Assembly of the People of Kazakhstan (APK) and the Association of Tatars and Bashkirs of Kazakhstan. 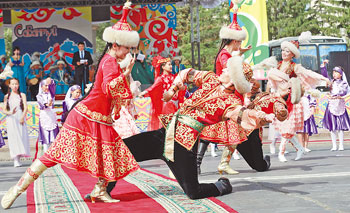 During the holiday Uralsk was turned into a concert venue, with performances of traditional Tatar songs and dances taking place on the streets.

Before opening the Sabantuy, the official guests visited the Red Mosque in the Tatar settlement and the museum of great Tatar poet Gabdulla Tukai, whose youth and development as a poet took place in Uralsk. After laying flowers at the Tukai bust, President Minnikhanov met with the Tatars and Bashkirs of Kazakhstan. Addressing the participants of the meeting, the head of Tatarstan emphasised the historical closeness of Kazakhstan and Russia.

“The role of Tatarstan is special in the rapprochement of our relationship,” Minnikhanov said. “A total of 226,000 Tatars live in Kazakhstan, and they feel comfortable here, they can bring their questions and interests to authorities. The conditions for preservingthe identity of the Tatar people are created here, and I am grateful to the leadership of Kazakhstan and personally to President Nursultan Nazarbayev for this very fact.”

“In Kazakhstan, we always feel at home,” he added.

President Minnikhanov also presented letters of gratitude to Chairman of the West Kazakhstan Centre of Tatar culture Rishat Khairullin, head of the Yalkym folklore group, poet Roza Akhmedgaliyeva and Chairman of the Council of Elders and Sunday school teacher Nazhiya Tukhvatullina. In addition, he presented a new car to the leadership of the Tatar Ethnic and Cultural Association of West Kazakhstan Region.

Vice Chairman of the APKand Head of the Secretariat of the APK Yeraly Tugzhanov also came with gifts. He presented honorary certificates and letters of gratitude to a number of citizens of the West Kazakhstan region, including to Vice Chairman of the Tatar Cultural Centre Alfiya Lezhnina.

A programme of cultural entertainment was also prepared for the Urals and guests of the city on Syrym Datov square. The Kazakh aul (village) and Tatar village, exhibitions of national cuisines and crafts were showcased near the main stage. Visitors could measure their strength and abilities in sports and folk games such as breaking pots, pulling ropes, climbing poles for prizes, taking coins out of an airan and many others.

At the opening ceremony of the Sabantuy, Akim (Governor) of West Kazakhstan Nurlan Nogayev stressed the importance of the event for both parties. “Today’s celebration is another confirmation of the strengthening and development of our relations.”

Veterans of the Great Patriotic War Bissen Zhumagaliev and Hamza Safin were given the honour of lifting the flag of the Sabantuy.

The Sabantuy concert was attended by folk artists of Tatarstan Lydia Akhmetova and Georgy Ibushev, honoured performer of the Republic of Tatarstan Ilsaf, soloists of the Gabdulla Tukai State Philharmonic, creative teams from Russia and Kazakhstan, top performers of the West Kazakhstan region and others.

As usual, the tatarchakuryash (Tatar wrestling) attracted wide attention. The grand prize winner, citizen of Uralsk Rinat Ibragimov, received a car, the keys of which were presented by the president of Tatarstan.

“Everything was at a high level, World Champion medallists were competing in the fight, and we would be happy to see them at the World Universiade in Kazan,” the head of Tatarstan said. “I think that the chances of Kazakhstan athletes are very high.”

“In general, I would like to express great gratitude to the Akim of the region and his team. The Sabantuy… is an example to different people of how to live, make friends, pass culture to each other,” President Minnikhanov concluded.

The gala concert of performers of Kazakhstan and Tatarstan and a performance of Tatar holiday songs, during which the passing of the symbol of Sabantuy took place, drew the event to a close. Next year’s National Sabantuy will be held in Kyzyl-Orda.

Distinguished guests of the event also included Chairman of the Executive Committee of the World Congress of Tatars Rinat Zakirov, Ambassador Extraordinary and Plenipotentiary of the Russian Federation to Kazakhstan Mikhail Bocharnikov, President of the Association of the Tatars and Bashkirs of Kazakhstan Grif Khairullin, member of the Mazhilis of Kazakhstan Zukhra Sayapova, Special Representative of the Republic of Tatarstan to Kazakhstan Ayrat Khasanov, leaders of the Tatar-Bashkir ethnic and cultural associations of Kazakhstan, intellectuals and academics from Tatarstan and Bashkortostan and delegations from the Saratov, Orenburg, Samara and Chelyabinsk regions of the Russian Federation.