By Ilyas Omarov in International on 12 June 2013

On the eve of the June 5 Second Ministerial Conference on Refugee Protection and Mixed Migration: Almaty Process, Antonio Guterres, UN High Commissioner for Refugees, sat down for an exclusive interview with The Astana Times to talk about the challenges his agency faces and his views on what could be done globally to address the problems of refugees more effectively. 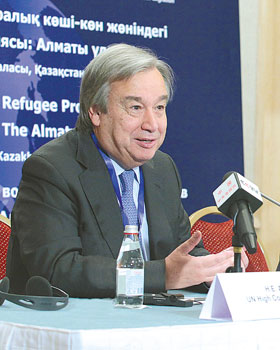 What can you share with us about the conference on June 5 and the Almaty Process?

We are bringing together the countries of Central Asia with our support to discuss what are today the most complex problems of what are we call people on the move.

We live in a period in this century where more and more people are moving, some of them because they just want a better life, some of them because they are forced to move because of conflict, because of persecution and now with climate change, other people are forced to move because of environmental, insecurity or other relative issues. And it is very important that states are able to manage this process in a way that takes into account their national interests, security and pacifism, but also that allows for migration to be dealt with and for those dealing with persecution from conflict to find international protection. And this conference aims to do exactly that by establishing a mechanism to reach this cooperation among states that can become more effective, more permanent in order to make sure that the movement of people does not become a destabilizing factor in Central Asia. This would be an element in a direction to solving the problems both economic and social in the region.

The total number of refugees according to UNHCR is 33 million. Do you have any unofficial data? Maybe the real number is higher or lower?

It is difficult to estimate. We believe that our data is correct. What is dramatic is that we see the number of refugees growing. There are more and more conflicts. If we look at the recent two years, we had Cote d’Ivoire, we had Libya, we had Yemen, we had Syria, the Democratic Republic of Congo, the Central African Republic, Somalia and South Sudan just to mention a few and at the same time with this multiplication of new conflicts we see that old conflicts never die. The international community has significant capacity to prevent conflict and to find solutions. That’s why the number of people fleeing wars is on the rise. Just to give you an example, we have 8,000 people fleeing Syria to neighbouring countries every single day. This shows the dramatic nature of the refugees’ situation in this world.

That’s why, again, it is important to see Kazakhstan adopting a very important initiative (dealing with this issue). The Human Rights Commission of Kazakhstan has presented a very important report with key recommendations to improve the way Kazakhstan addresses the problems of refugees. We are at the disposal of the government to work together in order for Kazakhstan to adopt and implement these recommendations, making it – we hope – a very important symbol of adequate refugee protection in the world. So, fortunately, refugee questions do not only present dramatic news, they also present good examples of the country’s willing to do its best to support the people in it and I commend Kazakhstan for its efforts in this regard.

Fifty percent refugees are from Asian countries. What could be the reason behind that?

I think the reason is related to the fact that three of the most dramatic crises of the last decade have included the wars in Afghanistan, Iraq and Syria. War produces the largest number of refugees. And these three situations alone are sufficient to explain this dramatic contribution (of Asian refugees). But let us not forget that we have an Africa that is also in dramatic crisis from the Democratic Republic of Congo to Somalia to Sudan. We even have the Columbia and Europe situations very recently to tragic areas in the Balkans and Caucasus. So, it is certain that the problem of refugees is not an Asian phenomenon. It is a universal phenomenon and I think it is the special dimension and depth of these three crises that help explain the high number of refugees in Asia.

Did the phenomenon of the Arab spring revolutions have any impact on the activities of UNHCR?

It is true that linked to it we had a certain number of situations of conflict that generated movements of populations. The two most dramatic examples is Libya, where it was centrally a problem of migrant workers that had to flee the country in numbers totaling more than 1 million. UNHCR is very actively involved in helping them go home. And Syria now, from which people are forced to flee because of this brutal conflict.

What do you think the situation in Central Asia regarding refugees will be after 2014?

I believe that when talking about 2014, we are talking about the transition in Afghanistan. I was today [June 4] very impressed by the wise words that I heard from the President of Kazakhstan. We know it is going to be a difficult period. There are many problems we have solved, but not everything will be easy.

I am hopeful that Afghanistan will be able to go through this very important moment without a collapse or dramatic increase in violence and that there will not be a meaningful number of Afghans that are forced to flee the country. I think it is the duty of all of us to be prepared for less positive scenarios, but all the efforts now must be concentrated on prevention.

I’m very happy to see the Kazakh government is very actively engaged in it. All efforts must begin helping the Afghans to find a way; to find an Afghan solution to this crisis, and be able to find ways to live with each other, to respect each other and to create conditions for the country to be successful in its transition.

Many countries have major problems with corruption and bribery. How do you think the UNHCR is facing these problems?

Fortunately, our activity has not been very dramatically impacted, but I think that is centrally a very important problem for the economic development of countries. And, obviously, wherever there is widespread corruption, people will suffer because economic development will be severely undermined. But in relation to refugee protection, that has not been a major impediment. We have been fortunate to be able to work sometimes in countries that are considered to be failed states or with very weak administrations and we are grateful that we are always allowed to do what we are supposed to do for the protection of the people we care for.

So do such factors as bribery and corruption hinder UNHCR activities?

I don’t think it has been a main factor. I think much more dramatic than that is the fact that some governments do not allow us to be present in some areas, or do not give us access to the borders or put restrictions on humanitarian aid to certain groups or populations or are engaging in dramatic violations of the human rights of communities.

In one of your interviews, you mentioned that we must first overcome the crisis in our minds. What did you mean by this?

One main problem is that refugees can be not political refugees or economic refugees. What is being done in this area?

Well, there is political persecution and other forms of persecution, be they religious or cultural. But we are more and more engaged in the international debate on the protection problems of peoples forced to flee. I’m not talking about voluntary migrants. A group of countries led by Norway, Switzerland, Mexico and Costa Rica discussed an initiative exactly to discuss the problems of people forced to flee for reasons related to climate change, security and other aspects. And I hope that the international community will be able to find ways, respecting the interests of states, to improve the human rights and the protection conditions for those who can no longer remain in their areas.

In one of your interviews, you mentioned that there is not a uniform Europe. How do you see the future of EU?

Well, I see a lot of concern. When I was politically engaged, I was deeply committed to European solidarity. I believe that Europeans today, unfortunately, are not moving for the European Union. To a certain extent, public opinions lack confidence in the European process and the political leadership of many countries. And because of that, European solidarity is also decreasing with very dramatic consequences for the continent. But I hope that better times will be coming in the future.

You are famous as a political statesman and put properties of character over political gain. Do you think that is important?

I think that it is true that political leaders of the world are today perceived by the people less positively than few decades ago. There are many reasons for that. I think the way technologies evolved, the way communications evolved, everything became instantaneous, everybody is under permanent scrutiny. But many political processes are still as defined as they were in the 19th century and there is sometimes a disconnect between the way political systems work and the modern world.

You work with Kassym-Jomart Tokayev who is Director-General of the United Nations Office at Geneva. Could you share your impressions of working with him?

He is a great colleague and an extremely wise and cosmopolitan man. And he is doing a very fantastic job in Geneva and I am very proud to be his colleague.