By Nadezhda Khamitova in International on 26 June 2013

President Nursultan Nazarbayev of Kazakhstan and President Islam Karimov of Uzbekistan held talks in Tashkent on June 14 during President Nazarbayev’s official visit there which focused on bilateral ties but also on pressing regional issues such as managing water resources and ensuring the security in Central Asia after the international coalition withdrawal from Afghanistan. 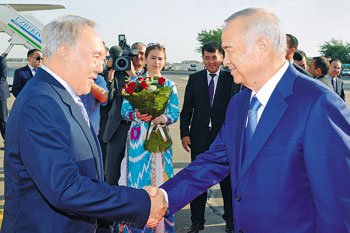 President of Kazakhstan Nursultan Nazarbayev and President of Uzbekistan Islam Karimov discussed a wide range of bilateral issues, focusing on ensuring security in Central Asia after the international coalition withdrawal from Afghanistan.

During a press briefing after the talks, President Nazarbayev said that the visit is further evidence of strong ties between the two neighbouring countries and emphasised that Kazakhstan attaches great importance to its relationship with Uzbekistan.

“Our work has a constructive approach towards solutions on all issues. Peace and security in the region and further common prosperity will largely depend on the interaction and common positions of Kazakhstan and Uzbekistan. Our summits on the highest level have become a tradition, and this is a very good sign,” President Nazarbayev said. He also stressed the symbolism of the fact that the visit was taking place in the year of the 15th anniversary of the eternal friendship agreement between Kazakhstan and Uzbekistan.

Of the new agreements signed during the visit, President Nazarbayev said, “I am confident that the agreement on strategic partnership that we signed today will lead to a qualitatively new level of relations between our two countries.” He also said that his visit to Uzbekistan will contribute to strengthening of Kazakh-Uzbek relations.

President Karimov thanked the Kazakhstan president for accepting his invitation to visit the country, stressing that it is of strategic importance for the development of relations between the two countries.

“We consider the official visit of Kazakhstan’s delegation as an important step in the development of Uzbek-Kazakh multifaceted relations. It is a good opportunity to continue to exchange views on issues of our mutual interest,” he said.

President Nazarbayev noted that for the development of an economic partnership it is important to strengthen the work of the intergovernmental commission on bilateral cooperation and expand cooperation within the framework of the Business Council, which has been established at the instructions of the two heads of state. President Karimov also stressed that the foundation of cooperation between Kazakhstan and Uzbekistan is their economic relationship, which should be developed in all areas.

President Nazarbayev reported that during the talks, a wide range of not only bilateral but regional and international issues were discussed, and noted common approaches to their solutions by the two countries.

Within the expanded meeting, President Nazarbayev praised the joint efforts and common achievements of the countries and expressed his confidence in the partnership. “We are close nations, and I am confident that we will negotiate a variety of issues for the benefit of our peoples,” he said.

Following the talks, the heads of state signed a strategic partnership agreement. This document sets out the basic principles and priority areas of bilateral cooperation in political, economic, trade, transport and communication, cultural, humanitarian, military, technical and other fields.

The agreement confirms a single coherent position regarding the development of a fair system of water management in Central Asia intended to resolve all issues in the water and energy sector, including the construction of new hydropower plants on rivers in accordance with universally recognised norms of international law and taking into account the interests of all states in the region.

“A great deal depends for our future on how [Central Asia] cooperates and trusts each other and how we resolve together our questions without hindering other states,” President Nazarbayev said. “Our approaches on many issues, including the water problem in the region, coincide,” he said of Kazakhstan and Uzbekistan. “And we want to send a friendly message to our neighbours that we ourselves have to resolve these questions. There are no unresolvable problems and questions.”

Meanwhile, Uzbekistan opposes the plans to build the Rogun hydropower dams on the Vakhsh River in Tajikistan and the Kambarata dam on the Naryn River in Kyrgyzstan, which could affect water supplies to Uzbekistan and Kazakhstan and the environments and economies of the two downstream states.

President Nazarbayev said of the issue that disputes could be solved “only on the basis of negotiations and the strengthening of mutual trust, without confrontation.” He said that the leaders of downstream states understand the economic needs of their upstream neighbours, but “one question cannot be resolved at the expense of another state, that is all we are saying.”

The parties also signed a programme of cooperation in the field of culture for 2013-2015, an agreement on cooperation between the Ministries of the Interior and a protocol between the State Customs Committee of Uzbekistan and the Ministry of Finance of Kazakhstan on the exchange of preliminary information about goods and vehicles crossing the customs border.

President Nazarbayev highlighted a number of other important areas of increased interaction. Among them were the development of interparliamentary ties, military cooperation and increased cooperation in crisis situations.

The President of Kazakhstan also expressed his gratitude to President Karimov for Uzbekistan’s support for Astana’s bid to host the international exhibition EXPO 2017.

“We invite our Uzbek friends to take part in the construction of their exposition and to demonstrate the possibilities of the economy of your country. Participation in the EXPO will strengthen the economic growth of our countries and strengthen cooperation. We count on the support of our brother Uzbekistan for our country’s candidacies in the upcoming election of non-permanent members of the UN Security Council for 2017-2018, as well as the UNESCO World Heritage Committee. Kazakhstan, for its part, will support the initiatives of your country,” he said.

President Nazarbayev also noted that an important factor in strengthening bilateral ties is the presence of ethnic communities living in Kazakhstan and Uzbekistan.

“Our citizens, especially the younger generation, need to know more about the rich cultural heritage of the historic friendship of our ancestors. I hope that the programme of cooperation between the Ministries of Culture will meet the spiritual needs of the Kazakh and Uzbek communities,” he said.

During the meeting, the two presidents also discussed the situation in Afghanistan. President Nazarbayev reported that the two states have similar positions on the issue.

President Nazarbayev concluded his remarks by once again thanking President Karimov for the trust, mutual understanding and openness of the talks, as well as his constant focus on strengthening the fraternal ties of good-neighbourliness and cooperation for the benefit of the peoples of Kazakhstan and Uzbekistan.

President Karimov also noted the importance of the negotiations and the results achieved. “In Uzbekistan, we value the historically established fraternal relationship between our peoples,” he said.

The Uzbek leader said the talks with his Kazakhstan counterpart were constructive and took place in an atmosphere of mutual understanding, and that the strategic partnership signed during the talks is an overdue step in supporting the fundamental interests of the two peoples.

“I am convinced that the important agreements signed today will fill the practical content of Kazakh-Uzbek relations,” he said.

The two leaders also participated in the opening ceremony for the new building of the Embassy of Kazakhstan and the monument to the great Kazakh poet and philosopher, Abai Kunanbayev.

“The lyrics of Abai, his words of edification and philosophical thought, all these are not only the spiritual heritage of the Kazakh people, but also of the entire Islamic world. His works appeal to knowledge, hard work, justice and brotherhood. His works are truly immortal. Over time, they become more and more relevant, defining benchmarks for social, cultural and spiritual life,” President Nazarbayev said at the opening ceremony.

The opening of the new embassy building in Tashkent is evidence of increasing bilateral cooperation. An agreement on the construction of new diplomatic missions in Astana and Tashkent was reached in 2010. On the instruction of President Nazarbayev, the embassy building was built in an oriental style in accordance with the style of the capital of Uzbekistan.

President Nazarbayev said at the opening that such events confirm the commitment of the two countries to promoting friendship and brotherhood. President Karimov also expressed his confidence in the permanence of the friendship between the two peoples, commenting that the new embassy and monument made the Uzbek capital even more beautiful.

“Abai Kunanbayev is well known and highly valued in Uzbekistan as a national poet, educator and humanist who dedicated his entire life to documenting the high aspirations and expectations of the people who fought for the triumph of goodness and justice. It is hard to overestimate the immense services of Abai Kunanbayev, who clearly and fully reflected the powerful spiritual force of the Kazakh people and their noblest qualities in his immortal works,” he said.

President Karimov expressed confidence that a monument to Alisher Navoi, considered to be the founder of Uzbek literature, will be erected in Astana with the support of President Nazarbayev.

After the opening ceremony the two leaders visited the Sheykhantakhur complex and the mausoleums of Sheikh Havendi Takhur and of prominent Kazakh public figure, poet and thinker Tole bi.

Diplomatic relations between the two countries were established on November 23, 1992. According to data from 2012, trade between the two countries grew 9.6 percent and reached US$2.75 billion, including Kazakh exports of US$1.67 billion and imports of US$1.07 billion. The share of foreign trade with Kazakhstan came to 10.5 percent for overall foreign trade of Uzbekistan, making Kazakhstan the third largest trading partner for its southern neighbour.

There are more than 810,000 ethnic Kazakhs living in Uzbekistan and about 460,000 ethnic Uzbeks are citizens of Kazakhstan, making them the third largest ethnic group in the country after the Kazakhs and the Russians.