ASTANA – Spain’s Minister of Defense Pedro Morenes Eulate made his first official visit to Kazakhstan June 10-11 to discuss with his Kazakhstan counterpart and other officials expanding bilateral military and military-industrial cooperation as well as regional security in Central Asia. 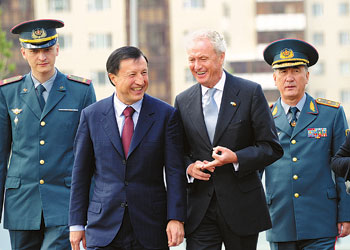 Ensuring the stability in Central Asia was a high priority topic during the meeting between Kazakhstan’s Defense Minister Adilbek Dzhaksybekov (second from left) and Spain’s Minister of Defense Pedro Morenes Eulate (second from right).

Morenes was met at Astana International Airport by Kazakhstan Deputy Minister of Defense Major General Bagdad Maikeev and other officials, as well as a guard of honor from the Capital Air Assault Brigade.

After the meeting, the two ministers signed a Memorandum of Understanding in the field of military and military-technical cooperation between the Ministries of Defense of Kazakhstan and Spain. The memorandum lays the foundation for strengthening ties between the two countries in such areas as industrial cooperation, the purchase of military equipment, scientific and technical activities, military education, cooperation in defense policy, logistics and consulting on issues related to peace-keeping operations.

“Today, the Memorandum of Cooperation between our armed forces was signed. We also exchanged views on issues of international security and the exchange of information,” Dzhaksybekov said.

The ministers noted the two countries’ excellent bilateral relations in the field of defense as evidenced by the signing of two important agreements in 2009. The first was the Agreement on Strategic Association between Spain and Kazakhstan to strengthen bilateral relations in the field of defense. The second was the Agreement on the Transit of Military Equipment and Personnel across the territory of the Republic of Kazakhstan in connection with the participation of Spain in international efforts to stabilize and reconstruct Afghanistan.

Industrial cooperation in the field of defense was also strengthened during the Spanish defense minister’s visit. The Spanish minister of defense visited the office of the National Company Kazakhstan Engineering, where Morenes familiarized himself with Kazakhstan’s defense industry industrial activities. Representatives of Spanish companies in the defense sector, including companies such as INDRA and MAXAM/EXPAL, which already have operations in Kazakhstan. also attended the meeting

In January 2013, Spanish company Airbus Military, a member of the European corporate group EADS (with Spanish, French and German participation), delivered two C-295 military transport aircraft built in Spain. Taking into account the possible purchase of additional units of the model, Airbus Military offered assistance in the establishment of a regional center for the maintenance of that aircraft model carrying out operations in the region. National company Kazakhstan Engineering also announced it plans to maintain aircraft such as the C-295 and A-400M out of Astana.

The Spanish defense minister and Kazakhstan’s Chief of Staff of Land Forces Major General Adilbek Aldabergenov also visited an air-assault brigade where Morenes got acquainted with the conditions of service, armaments and equipment of Kazakhstan paratroopers. The Spanish defense minister praised the Astana air-assault brigade’s readiness and professionalism.

During the visit, the two ministers also discussed strengthening bilateral military-technical cooperation. The talks included increasing cooperation in the development of the defense industries of both countries and the participation of Spanish military troops in the peacekeeping training operation Steppe Eagle, scheduled for August.

“Today, the Minister of Spain visited our air-assault brigade, which is located near Astana. He was impressed by the gear, the professionalism of our troops and the conditions in which they are serving,” Dzhaksybekov said.

During his visit to Astana, the Spanish official also met Kazakhstan’s Foreign Minister Erlan Idrissov to discuss regional security in light of the upcoming withdrawal of the international coalition forces from Afghanistan.