By Nadezhda Khamitova in International on 26 June 2013

ASTANA – On June 15, a trip from Savoy, France to Astana on solar-powered bicycles kicked off at the National Institute of Solar Energy, Savoy Technolac. On “The Sun Trip: On the road to Astana EXPO 2017,” 33 riders from Belgium, Switzerland, Canada, the Czech Republic and France, as well as Askar Syzbayev of Kazakhstan, will use solar power (and their legs) to reach the capital of Kazakhstan to support EXPO 2017 and its theme, Future Energy, as well as to draw the world’s attention to renewable energy sources and energy conservation policy. 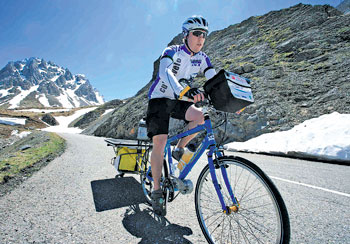 The solar powered electric bicycle race from France to Kazakhstan, which has started on June 15, promotes upcoming EXPO 2017 and its topic “Future Energy”.

Journey to Renewable Energy Association President Florian Bailly masterminded the race, which he hopes will generate interest in renewable energy and energy conservation policy and promote alternative energy access for all. The international participants are also supporting the Astana Solar project, a joint Kazakh-French project for the development of solar energy technologies and the creation of an industrial production line of solar panels in Kazakhstan.

The riders’ bicycles have electric motors powered by solar panels worth 8,000 euros. Each bicycle has an attached trailer with two solar panels and two lithium batteries for powering the motors. The motors allow riders to speed up without pedalling faster.

During the trip, stops in the cities of Venice, Sofia, Bucharest, Odessa, Istanbul, Sochi, Baku, Atyrau and Aktobe are planned before reaching the finish line in Astana. Each participant has chosen his own route. The entire trip will cover about 6,000-7,000 miles, depending on the chosen route, and will last from two to three months. The majority of cyclists are expected to reach Astana in August and will be welcomed by residents of the capital. A mass bike ride will be organised after all the participants have arrived.

“All participants of The Sun Trip 2013 are full of energy, including both experienced and novice travelers, and all are united by one common idea: to draw attention to the use of renewable energy,” Talgat Yermegiyaev, Chairman of the Board of JSC National Ccompany Astana EXPO 2017, said. “The Sun Trip is an unprecedented international project that will tell the people in Europe and Asia about the International Specialized Exhibition EXPO 2017. I wish you a good trip!”

Astana EXPO 2017 is one of the key organizers of the bike ride.

“We want to organise a new movement, similar to the Dakar [the Dakar Rally, a road race from Paris to Dakar], but for cyclists, and demonstrate the capability of alternative energy,” Bailly said.

He said that the choice of Kazakhstan as the final destination was based on the country’s embodiment of the “spirit of adventure” as well as the active development of cycling in the country.

“The country is very beautiful, especially its nature. Currently, French people are acquainted with Kazakhstan’s Astana cycling team and, in particular, with Alexander Vinokourov. So for the French right now, cycling is inseparable from Kazakh culture,” Bailly told in an earlier interview.

Bailly has already done a solar cycle trip: he travelled from France to Tokyo, covering 10,000 kilometres and passing through 12 countries over four months in 2010. He loved how interested people were in his revolutionary bike: “Over the journey I met many people and was surprised that everyone, no matter whether young or old, rich or poor, was interested in my bike. I do not really speak Chinese or Russian, but we exchanged a few words or communicated through gestures. But what is most interesting—everyone knew how a bike works!”

Syzbayev, Kazakhstan’s representative on the trip, is only 25 years old but has already travelled in 18 countries. He has a degree in tourism management and lives in Astana at the moment. This will be his first trip on bike with solar panels and his goal is to cover 150 kilometres a day. This is not his first long distance ride: he has ridden from Kazakhstan to Afghanistan on a normal bicycle.

The project is officially supported by the former economy minister of France and president of the Savoy region, Herve Gaymard; European Union Commission member Michel Barnier; Olympic champion and member of the International Olympic Committee Jean-Claude Killy; TV star and president and founder of the Fondation Nicolas-Hulot environmental organisation Nicolas Hulot; Olympic champion Alexander Vinokourov and the Embassy of Kazakhstan in France.

Among the partners of The Sun Trip are EDF (the French national electricity company); INES (French Research Centre for Solar Energy) and ADEME (the French government agency for the use of alternative energy), among others.