A two-day public bicycle ride with Astana Cycling Team stars Alexander Vinokourov, the recent London 2012 Olympic champion, and the recent Giro d’Italia 2013 winner Vincenzo Nibali took place in Astana and Almaty on June 8 and 9. The events celebrated the recent win at the Giro d’Italia, a prestigious and nearly century-old race, on May 26th by Nibali. 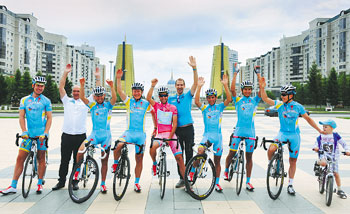 Early on Saturday morning, while much of the capital was only getting into their daily routines, bikers, enthusiasts and champions of healthy lifestyles rode with the pros. The ride started from the Baiterek Tower, in the heart of the city. Children, university students, amateur bikers, parents and fans of the national team showed up on bikes to try their chances at beating the champions or at least keeping up with them.

Fans were given Astana Team caps and T-shirts signed by Nibali and Vinokourov. The Olympic champion and now general manager of the professional team assured attendees that the recent victory at the Giro d’Italia was only the first of many wins to come for Astana Team. Nibali thanked his fans and said he was happy to see so many supporters as the peloton embarked on the 7.5-kilometre ride. The champions set a pace their fans could keep up with.

Round-the-world cyclist from Azerbaijan Ramil Ziyadov was pleasantly surprised at the ride in Astana. Purely by coincidence, he happened to be passing through the capital, heading towards Russia, when he encountered the Astana Team.

“I started from Barda, in Azerbaijan,” Ziyadov told sk-sport.kz, a local media outlet. “I have been travelling for three months and the whole trip will last about three years. I travel about 60 to 150 kilometres per day,” he said. “I am very glad to be at this cheerful sports event with so many world-class professionals. My goal is to tell the world about Azerbaijan. Before Kazakhstan, I travelled in Russia, Uzbekistan [and] Kyrgyzstan. I am headed to Mongolia via Russia next, then to China, Japan, the U.S. and so on.” Kazakhstan’s gusty winds were a challenge, the biker said.

From Almaty to Astana and back

The next day, despite the early heat of the Sunday morning, some 2,000 cyclists attended a similar event in Almaty with the same Astana Team heroes.

“I travelled from Almaty to Astana and back with my wife and my son so as not to miss out on the opportunity to spend the whole weekend with our heroes, Nibali and Vino,” a very excited Vlad Khan said, barely able to catch his breath. “Obviously, there are many more fans in Almaty; there are more than 2,000 people here today. In Astana there were about 200 maybe, but still, both events were organised at a high level. Thanks to the organisers, thanks to Nibali for the win and Vino for the gold [in the London Olympics]; we remember all this and are thankful to them for setting a good example for our kids. My 12-year-old son has been following Astana’s success and wants to beat Vino when he grows up; for me, this is the best thing to hear as a father,” he said.

The Astana Team champions crossed the finish line to an ovation from the crowd. “I am very glad to share my excitement with the citizens of Kazakhstan. The Giro d’Italia win was a hard one and this ride today was dedicated to our victory,” Nibali said to sum up the event.