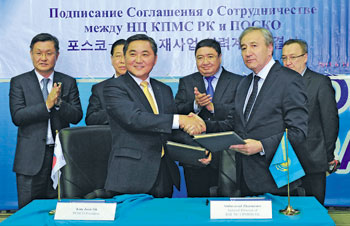 A unique ‘Kazakhstan alloy’ has a great demand on the international metallurgical market, as evidenced by the recent signing of an MoU with South Korea’s POSCO.

PAVLODAR – Kazakh scientists have developed a unique alloy that is now in demand around the world.

“Today, our ferrosilicoaluminum is patented in the world as a ‘Kazakhstan alloy’ and the demand of the world’s leading metallurgical industries on it exceeds millions of tons,” said academician and General Director of the National Center on Complex Processing of Mineral Raw Materials of the Ministry of Industry and New Technology Abdurasul Zharmenov.

This technology, which represents a unique alloy of ferrosilicoaluminum, was created by Kazakh scientists and metallurgists who have received international quality certificates and licenses for this development.

“This achievement is the result of the hard and fruitful work of scientists of the Karaganda Chemical and Metallurgical Institute, which is part of our National Center,” Zharmenov said. 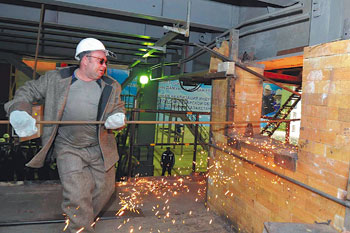 Director General of the LLP KSP Steel Eduard Kramer, a metallurgist and scientist, said that this development not only solves the technological challenges of smelting steel, but also environmental problems, as ferrous silicon aluminum is manufactured from Ekibastuz low-grade high-ash coal, which is stored in dumps, causing damage to environment. Now, a ton of deficit “Kazakhstan alloy” is produced from four tons of this rock.

And, according to the branch director of the Pavlodar LLP KSP Steel Vadim Savitsky, ferrosilicoaluminum produced using this technology significantly reduces energy costs and the consumption of ferrosilicon. The steel smelted at his plant is also of higher quality, he said. Therefore, the LLP, which produces oil pipelines, pump-compressor pipes and other metallurgical products, has placed a bet that the production of the alloy will cover its needs

International companies have also adopted the use of this technology in their production facilities. South Korean company Posco, a large company with an annual turnover of US$80 billion, has begun construction in Kyrgyzstan of a plant for the production of 200 thousand tons per year of ferrosilicoaluminum based on Kazakhstan’s technology. A second enterprise with Kazakhstan’s participation is planned for Brazil and another plant is planned for construction in Karaganda City with the participation of major steel companies from Germany and Japan, Zharmenov said.

Following a recent launching ceremony for the National Center for Complex Processing of Mineral Raw Materials, the Ministry of Industry and New Technologies and the South Korean corporation Posco signed a Memorandum of Cooperation concerning the use of this technology.

“This production will engage 350 employees. The cost of the project is 8.1 billion tenge ($53.6 million) and the payback period is four years. By the end of 2013, two furnaces (24 MW each) will be introduced into operation. This will increase the production of the alloy up to 30,000 tons per year. In addition, the Memorandum signed with one of the major steel companies of the world confirms the fact that foreign companies are interested in purchasing this product,” said Pavlodar Regional Akim (Governor) Yerlan Aryn, commenting on the launching event.