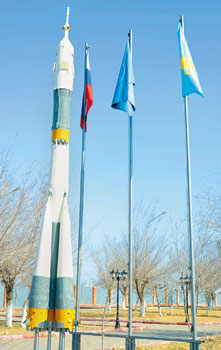 A new museum is going to be constructed in order to emphasize the importance of the city of Baikonur.

ASTANA – In an effort to increase Kazakhstan’s tourism infrastructure, the construction of a park and museum called Fantastic Space at Kazakhstan’s Baikonur Cosmodrome is being proposed within the country’s master plan.

The decision to include the proposed park in the master plan came following recent discussions with activists in the Kyzylorda region.

The recent presentation of the plans for the project also included proposals for tourism development in the Kyzylorda region.

According to the proposed developers of tourism projects in the Kyzylorda area, high-end spa resorts can be located within thermal water fields near the city of Aral; Zhanakorgan, located 20 kilometres southeast of the village of Zhanakorgan.

“Ensuring the development of infrastructure will expand the potential of the tourism industry in the Kyzylorda region,” the director of the Astana branch of JSC KazNIISA, Turlybek Mussabayev, said.

Baikonur is the world’s first and largest cosmodrome. It is located in Kazakhstan’s Kyzylorda region near the village Tjuratam. The cosmodrome includes an area of 6,717 km ² (2,593 square miles).