By Alexander Kuzennyi in People on 26 June 2013

NORTH KAZAKHSTAN – Almost all of the economically active population of Karaagash village is employed in manufacturing. 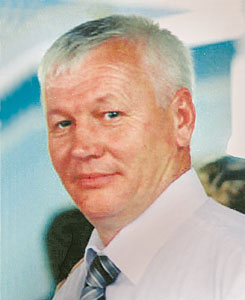 The average salary here is 80,000 tenge. The aul (“village” in Kazakh) was first revived by the Zvolskiy farming partnership more than 10 years ago after the hardship years following the collapse of the Soviet Union.

About 10 years ago the partnership was re-registered as Astyk-STEM LLP, under the leadership of well-known agricultural manager Sergei Zvolskiy, whose dedication to finding new and effective methods of farming have brought the village these unprecedented profits.

Astyk-STEM was founded through the Zvolskiy farming partnership. Sergei Zvolskiy invited his driver, a former chief agronomist of the farm and a former chief animal technician to be co-founders. The management quartet was initially dictated by the need to create a material base for farming tasks: someone had a tractor; someone had a truck and haying equipment. But this was a minor factor.

The main reason was the knowledge of his teammates and their drive to get to work.

However, with all the drive in the world, the idea of entering a market without money is a fantasy. In those years, the prospect of getting a loan was equally fanciful. Only in 2008 did their partnership finally get access to credit and, after the first lease payment of 12.5 percent, bought a seeder.

At the initial stage, their business was saved by strawberries. Zvolskiy purchased 1,000 bushes of the perennial berries in the Omsk region and in a year they produced a rich harvest. The partnership earned two million tenge. At the same time, they set a goal of learning how to make money in all weather conditions.

After a trip to Israel, Zvolskiy decided to initiate an Israeli carrot project. Israeli farmers get double profits despite the fact that they grow carrots in almost desert conditions. Water in Israel is worth its weight in gold: a litre of water costs six tenge, if counted in the Kazakhstan currency. Yet Israeli farmers make a fortune exporting their high-quality and environmentally friendly carrots.

Israeli agrarians were the first in the world to use drip irrigation, starting in 1953. Astyk-STEM started using it in 2010. They arranged an irrigation area of 150 hectares. One third of the plantation is supplied with water from local wells; the rest of the water is brought from afar.

Using relatively little water, the carrot crop was a great success. Having collected 50 tons of carrots per hectare on average, the villagers faced the challenge of where and how to store and sell their produce. They bought a new combine for 20 million tenge and built a vegetable storage capacity for 1,500 tons.

Last year, they grew a double crop that cost 17 tenge per kilo to produce and sold for 56 tenge, a profit margin that caused Zvoliskiy’s visiting Israeli colleagues to doff their hats to him.

In Israel, Zvoliskiy also saw tomatoes grown with drip irrigation and decided to try it in his partnership, but in his own way. He tied a 1.5 litre plastic bottle to a stick near each bush and filled the bottles with water every morning. By opening their corks just enough for a drip of water, he made a homemade drip irrigation device. In August, he had his results: every bush had three or four tomatoes more than using the previous system.

In 2010, when the project was making its first steps, carrots and potatoes grown with this new technology brought a net income of more than $100,000. In 2011, the income was already $350,000, which allowed the village to invest 124 million tenge in production development. The rest is spent on improving the villagers’ quality of life. Such is the financial policy in the partnership.

In the past year, the village has collected 46 tons of potatoes per hectare at a cost of 20 tenge per kilo and a sale price of 50 tenge. Two thousand tons were stored. The villagers also cultivate beets, cabbage and onions.

“We collect two times more vegetables and potatoes at less than half the cost, and this is not the limit,” Zvolskiy said.

While investing money continually in the development of production, Zvolskiy does not forget about the social sphere, allocating 13-15 million tenge annually for social needs. He supports the school and medical station, provides transport for the delivery of coal, wood, hay and stubble and has built a leisure centre in the village.

The villagers are well aware that the more money the company makes, the higher the income of each family. The land shareholders, in addition to a salary of 80,000 tenge, a record in the rural area, consistently receive 10 percent of the total yield.