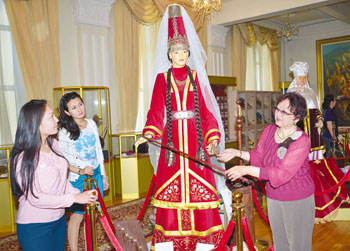 A garment collection showcased in the museum presents all types of Kazakh women’s national costumes.

ALMATY – A museum dedicated to great women in Kazakhstan’s history opened May 29 at the Kazakh State Women Pedagogical University.

The Aktymar History and Ethnography Museum is part of an educational programme called Museums of Kazakhstan” and highlights multiple aspects of great women in Kazakh history. It tells the story of women who contributed to the establishment of the Kazakh state from ancient times to the present day.

Among them are the legendary Umai-ana, the Scythian Queen Tomyris, wives of some of the khans who, after the deaths of their husbands, were able to run the state, handle relations with neighbouring states and raised heirs to the throne.

The museum also displays samples of rich traditional clothing and unique women’s jewelry, various pieces of handicraft, personal belongings of prominent women and musical instruments. The guest of honour at the opening of the museum was the first Kazakh woman researcher in musical instruments, ethnologist Zabira Zhakish, who showed slides and recounted the history of folk musical instruments.