Leaders Expand Basis for Stronger Partnership between EU and Kazakhstan

ASTANA – During a June 1-3 visit of European Commission President Jose Manuel Barroso to Kazakhstan he met President Nursultan Nazarbayev of Kazakhstan to discuss a wide range of issues, including the current status of and prospects for political, trade and economic, cultural and humanitarian cooperation. 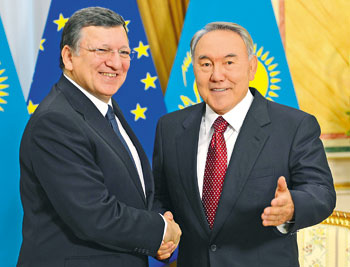 Meeting in Akorda on June 3, the two leaders also discussed the broader international agenda and activities in Central Asia in particular. Barroso noted that the visit of Nursultan Nazarbayev to Brussels in 2010 contributed greatly to the expansion of relations between Kazakhstan and the European Union. Later, at a joint press conference, President Nazarbayev stressed that Kazakhstan considers the development of relations with the EU strategically important.

“During recent years, the EU has been the main foreign trade and political partner of our country. It is worth noting that the foreign investments of EU countries to Kazakhstan reach US$80 billion. Bilateral trade turnover has reached $53 billion. Moreover, Kazakhstan has signed strategic partnership agreements with EU countries such as France and Spain. We have also agreed with Germany on the delivery of raw materials in exchange for technology. EU and European companies are actively participating in the industrial development of our country,” the president said.

President Nazarbayev also noted that during negotiations it was agreed to accelerate talks over a new enhanced partnership and cooperation agreement between Kazakhstan and the EU. “We talked about simplifying the visa regime for certain categories of our citizens. We also discussed the possibility of providing free flights for our airlines to European countries and the assistance of the EU in the process of Kazakhstan’s accession to the World Trade Organisation (WTO). We have reached consensus on these issues and we have the EU’s support, for which I am grateful to Mr. Barroso,” the president added.

“We have discussed issues of regional security and stability in our region. During the discussion about the Customs Union (CU) and the Common Economic Space (CES), it was noted that they would not interfere with our trade with third countries, including the EU. I am confident the talks will become a new milestone for the further rapprochement of Kazakhstan with the EU countries in economic and humanitarian terms. I believe that the first visit of Mr. Barroso was successful and fruitful,” President Nazarbayev said.

President Barroso in turn noted that this visit was his first official visit to Kazakhstan in the position of president of the European Commission (EC). Its timeliness lies not only in the fact that it takes place in the year of the 20th anniversary of the establishment of diplomatic relations between Kazakhstan and the EU, but also because bilateral cooperation is actively developing in all areas.

“We intend to open a new era in our relations through the completion of negotiations for adopting a new agreement on our expanded partnership. This document is aimed at a more comprehensive cooperation. The EU plans to continue to promote the expansion of this partnership in all fields of mutual interest. The enhanced partnership and cooperation agreement will provide a strong foundation for further intensification of our relations, which are very dynamic. The EU is indeed one of the largest trade partners of Kazakhstan; its share accounts for about 45 percent of the total trade turnover of the country, and the level of bilateral trade is around 31 billion euros. Despite the difficulties that Europe has recently seen, the past years have seen rapid growth in trade turnover between the parties,” President Barroso stressed.

The president of the European Commission highlighted that the accession of Kazakhstan to the WTO will promote a higher growth potential of investments. “The EU has always supported the initiative of Kazakhstan on WTO accession. I am pleased to confirm that our parties have come to an agreement on the essential elements of the terms of entry into the organisation. We look forward to signing the relevant documents. We also support the strategy of Kazakhstan to further diversify the economy and focus on the development of the green economy,” he added. He also stressed the important role of Kazakhstan in promoting regional cooperation in Central Asia, in particular in the joint resolution of the problems of extremism, terrorism, drug trafficking and water resources management.