Kyrgyz Artists Show Their Vision of Illusion on the Steppe

ASTANA – An exhibition called “Astana in the art of Kyrgyz artists” dedicated to the 15th anniversary of Kazakhstan’s capital is now open in the Palace of Independence. It includes about one hundred works of 17 well-known Kyrgyz artists, and all of them are devoted to Astana. 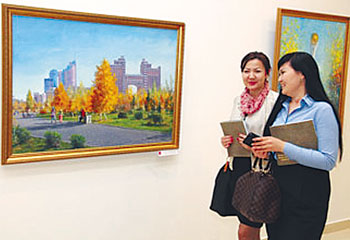 Kyrgyz artists have displayed their vision of Astana at the Palace of Peace and Harmony.

Kyrgyz artists have presented their original art and their perception of what some would call the “Illusion on the Steppe.”

The artists are national artists of Kyrgyzstan, winners of prestigious international exhibitions Rifkat Bukharmetov, Saparbay Osmonaliyev, Suyutbek Torobekov, Ormon Idirissov, Dina Tserendorzhieva, Jumabek Bazarbayev and others. In 2011-2013, these artists, supported by the club of friends of the Embassy of Kazakhstan in Kyrgyzstan, were working in Astana, and now the results of their work are on display in the Palace of Independence.

The authors presented not only traditional pictures of summer and autumn (most colourful) motives, but also the winter motives, which is quite challenging because it is difficult for an artist to show white colour.

With noticeable curiosity the artists pictured “frost and sun,” entertainment on ice-hills, snowmobile races – the joys of the northern people, which are little known to the artists from the southern areas. They painted different parts of Astana, including the old, Tselinograd part of the city, where one-story houses with courtyards are still present.

However, the most inspiring parts of the city were the symbols of the city – the Baiterek Tower, the Palace of Peace and Reconciliation, the Islamic Center, other colourful sights and objects, such as the Georgian restaurant Bagrationi and the Melnitsa (Mill) Ukrainian restaurant.

Saparbay Osmonaliyev’s portrait of Nursultan Nazarbayev, the first President of Kazakhstan, against the background of Astana in full view became the centerpiece of the exhibition. The painting is called the “City of Dreams”. Its plot is simple, but the performance is expressional.

In addition to paintings, a large photo exhibition was presented and a catalogue with reproductions of the pictures, portraits and brief biographies of their authors in three languages were published.

The exhibition was among the first in a series of international cultural events in honor of the 15th anniversary of Astana, marked on July 6. It also anticipates the Days of Culture of Kyrgyzstan in Kazakhstan.