By Nadezhda Khamitova in Sports on 26 June 2013

ASTANA – On June 13-14, during the Council on Physical Culture and Sports of the Agreement on Cooperation between CIS countries held in Astana, Kazakhstan put forward an idea of a water polo league within the CIS countries and the establishment of a Eurasian league in the future. 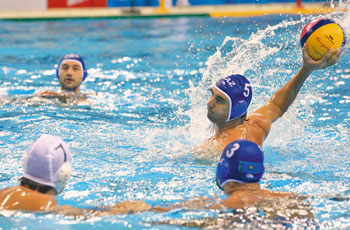 Water polo has been a popular sport in Kazakhstan for decades.

“On the agenda of the meeting was the creation of the CIS Water Polo League. Our clubs participate in the Continental Hockey League (CHL) and in a basketball league in which clubs from CIS countries take part,” Deputy Chairman of the Agency for Sports and Physical Education Elsiyar Kanagatov said.

“The head of state instructed us to intensify efforts to promote the participation of our athletes at championships in foreign countries, in foreign leagues, and so we arrived at this idea,” he continued. “Water polo is an Olympic sport; the CIS countries, Russia, Belarus, Azerbaijan and Ukraine practice it as well, and in the future we would like to create a Eurasian water polo league. The main initiator of the idea is our country, as water polo is one of the priority sports we would like to develop it further. For now, we are proposing a league within the countries of the CIS; in the future, if all goes according to plan, we will be able to connect to other countries.”

The project was initiated by the Federation of Water Sports in Kazakhstan. According to the vice president of the organisation, Andrey Kryukov, the need for such a tournament is dictated by the unsatisfactory state of affairs in the development of water polo in the region. To date, because there is no Kazakhstan water polo championship, the Astana Water Polo Club competes in Russia’s water polo championship as a foreign club, and is therefore not entitled to participate in home games and not involved in the development of rules, the calendar of events or other key processes.

“Since 2004, we are the only national team in the CIS that has qualified for the Olympic Games and world championships. Two of our teams consistently play in the Russian league, where we are in the leading group. However, this cannot continue in the future, because it does not promote rapid growth, does not create a competitive platform. Therefore, we support the proposal to create a Eurasian water polo league,” Kryukov said.

According to the Federation of Water Sports’ plan, sponsors and participants’ contributions, as well as revenue from advertising and television broadcasts, will provide financing.

“We will find the financial means – that’s not a problem. Currently, we are looking for support for the initiative at the political level, so we turned to the Council on Physical Fitness and Sports. The proposed project will be implemented on the basis of the Russian championships. Arrangements have been made; now we only need to work out the details,” Kryukov said.

The proposal is being considered by the council. After consideration, a working group will be set up to develop this issue with all the water sports federations of the CIS countries. According to the proposal, only Russia can delegate 12 clubs in the top division of the country. In addition, Azerbaijan, Armenia, Belarus, Moldova, Uzbekistan, Ukraine, Georgia, Israel, Lithuania and Turkey can take part in the tournament. The tournament will be fought between 20 teams divided into Western and Eastern divisions.

Establishing the Eurasian water polo league on the principles of equality and partnership will provide its participants with an opportunity to work together to develop the governing bodies, structure and provisions for governing the activities and conduct of the game in their countries, Kazakh officials believe.